NOTE: Erik Christensen, SFSC’s dean of Applied Sciences and Technologies, is spending four weeks at the Siemens Technik Akademie in Berlin, Germany, while he completes the Siemens Mechatronics Systems Certification Program for instructors who use Siemens mechatronics stations in their classrooms. He is sharing his experiences through weekly updates.

I have now completed three weeks of training at the Siemens Technik Akademie (STA) here in Berlin, Germany. This week, I started Level 2 training and no longer am the sole American here.  This new class is a mixture of electrical and mechanical engineers including five from the United States (two from Austin Peay University in Clarksville, Tenn., one from Motlow Community College in McMinnville, Tenn., one from Western Nevada College in Carson City, Nev., and me), two from South Eastern Regional College in Northern Ireland, two from King Abdulaziz University in Jeddah, Saudi Arabia, and two from Algonquin College in Ottawa, Ont., Canada.  The course content has shifted from active engagement teaching strategies to hands-on technical aspects of teaching mechatronics, and we spent several days this week learning how to teach Programmable Logic Circuit (PLC) programming and how to assess and optimize factory operations. 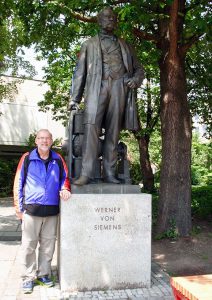 This photo, taken outside the Technische Universität Berlin, is a statue honoring Werner von Siemens (1816 – 1892), who founded the electrical and telecommunications goliath Siemens in a Berlin courtyard in 1847. A German inventor and industrialist, Siemens’s name has been adopted as the SI unit of electrical conductance, the “siemens.”  The Siemens corporation currently employs over 348,000 worldwide in 140 countries, including 11,500 workers in Berlin.  Training is extremely important to this technology corporation which operates 30 different training sites throughout Germany alone.  Mechatronics training is currently centered here in Berlin but will expand to include Nuremburg next year.

It continues to be a privilege and joy to represent SFSC here in Berlin. I have one week remaining in the month-long training program.  I am making good connections with colleagues at other colleges and universities worldwide that I will be able to network with as we implement our new mechatronics program.  I am currently working on a project with two Canadians to develop a complete training plan for teaching robotics in a mechatronics program which could be useful, as we have purchased two industrial robots as part of our new mechatronics program equipment loadout.

I have now completed my first two weeks of training at the Siemens Technik Akademie (STA) in Berlin, Germany and have graduated from the Siemens Mechatronics Systems Certification Program (SMSCP) Instructor Certification: Level 1 (Mechatronics System Operator.) The photo is of me with my principle instructor (we have four different instructors), Burkhard Colditz, taken while on a river cruise that we took to celebrate our successful completion of this part of the program.

The next two weeks will be on Level 2 (Mechatronics System Technician) which will focus on teaching system modifications and programmable logic circuit (PLC) programming. The training continues to highlight the system approach to teaching, starting with applications to generate interest in learning more and helping students to understand “why” it is important to learn each topic.

We then delve down to the specifics to understand the basics principles of how individual components work. We work on state-of-the-art industrial electro-pneumatic and hydraulic systems controlled with programmable logic circuits (PLCs.) Virtually, every session integrates group presentations – right in line with our emphasis of promoting soft skills for our students.

It has continued to rain about four out of every five days since I arrived here two and half weeks ago. However, that has not diminished my ability to explore Berlin.  I have visited Germany a number of times in the past but never Berlin.  It really amazes me how international Berlin is, and that it is hard it is to find a real German restaurant.  It is far easier to find Italian, Greek, or even Japanese food than German!  The STA provides us a three-course lunch every day in its cafeteria, and the cuisine is strictly German and very good.  Being totally immersed with written and spoken German, I am quickly learning to understand many signs and billboards, even though I have never taken a formal course in German.  It continues to be a real privilege and joy to represent SFSC here. I am learning a lot that I will be able to bring back and infuse into our new mechatronics program. 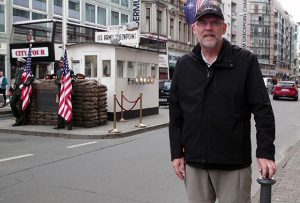 I have just completed my first week of the Siemens Mechatronic Systems Certification Program training at the Siemens Technik Akademie (STA). The instruction is top rate, well organized, and squarely focused on exploring ways to create learning environments focused on student engagement.

This first week, called the “Paradigm Week,” concentrated on the German teaching and learning methods referred to as the “System Approach” [i.e., starting at the macro (system) level and drilling down to the micro (component) level] as well as in introduction to the Siemens Mechatronics Systems Certification Program. We were asked to complete a variety of group exercises as well as develop and present a system approach sample lesson plan.  I was able to integrate a number of AVID strategies and flipped learning techniques that I have been using at SFSC, and they were well received by both my fellow students and faculty.  So much so, that I have been asked to demonstrate some of these next week!

During the week, we toured the Siemens Professional Education program which offers programs for students from 11th grade through graduate school.  We also had an informative and interesting factory tour of the Siemens Energy Automation plant which is located just a few blocks away from the STA.

For relaxation and group bonding, we enjoyed a walking tour of the Brandenburg Gate and the surrounding area, including Checkpoint Charlie.

Similar to Highlands County, it has rained every day since our arrival nine days ago. This morning, there were reports of flooding of buildings, the underground subway system, and even buses!  Even so, Berlin is an amazing and vibrant city with much to offer.  I have been amazed at the variety and quality of food available. There are a number of discount groceries stores all over the city, including Aldi. But the amazing thing is that the prices that are about half what we pay in Avon Park!  I know the next three weeks of classes will go fast, but I certainly am going to take advantage of all that Berlin has to offer.  Even so, this won’t be my last visit to this exciting city.

I am here in the historic city of Berlin, Germany attending a four-week Siemens Mechatronics Systems Certification Program instructor certification course at the Siemens Technik Akademie.   Classes are held in a 100-year old building using ultra-modern automated mechatronic equipment preparing students for Industry 4.0, the latest generation in automated manufacturing.  I am here in direct support of our Department of Education Title V HIS-STEM grant focused on encouraging Hispanic and low-income students to pursue careers in a STEM (Science, Technology, Engineering, and Mathematics) field.  The hope is that by establishing a mechatronics program at SFSC, the college can become a catalyst to help grow the industrial capacity in our service counties and provide high wage technical skills to our students.

My class is small, just eight other students (six from Algonquin College in Ottawa, Canada and two from King Abdulazlz University in Jeddah, Saudi Arabia).  The curriculum focusses on the Siemens systems approach which is all about engaging students to learn by doing starting from a macro view and working down to the micro view.  In this train-the-trainer program, I am learning the very systematic and highly-disciplined German approach to teaching which focuses initially on getting students to understand the characteristics of the entire system first.  The curriculum then drills down to module-level, and then component-level before concentrating on troubleshooting methodologies and having students learn the theory from the system rather than before learning the system.  The hope this will make students more self-reliant and able to transfer knowledge this from one area on their own by applying the basic principles to other systems.

Berlin, the capital of the Federal Republic of Germany has a population of 3.5 million, is a fascinating city to visit.  Covering an area of 892 square kilometers, it is the Goliath among German cities. By international comparison, Berlin is the second largest city in the European Union in terms of its population and the fifth largest in terms of area. The population density is the highest in Germany (3,809 Berliners to every square kilometer). The city is awash with 175 museums and has a very cosmopolitan feel hosting 4,650 restaurants with every imaginable cuisine.

English is the official language at the Siemens Technik Akademie and is widely spoken just about everywhere.  Public transportation options abound which makes it extremely easy to get just about anywhere in the city.