Student Erika Weaver-Coleman Speaks of Her Life Journey at Commencement 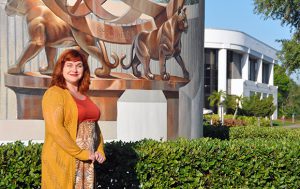 Erika Weaver-Coleman graduates with an Associate in Arts degree from SFSC at the Spring Commencement on Thursday, May 3. Although she will tell you that she struggled through high school, this mother of four children will be the speaker at the 4:45 p.m. Commencement ceremony.

Originally from Opelika, Ala., Weaver-Coleman’s early life was unsettled. Her father was a manager in the furniture business and transferred to new work locations several times. “I went to nine different high schools between 1995 and 1999,” Weaver-Coleman said. “The moving around was difficult.” Between the constant movement and the death of her beloved grandfather, she became depressed.

“I had difficulty in high school,” she said. “So, I started going on a search for myself. I traveled a lot—to Arizona, New Orleans, London, New York, and Amsterdam.” She took a job at Six Flags Over Georgia. “I was part of their Halloween event, Fright Fest, where I played the Bride of Frankenstein. Later, I played Raggedy Ann in a clown house and popped out of a jack-in-the-box.”

While at Six Flags Over Georgia, she met members of a traveling performance art group and joined them on tour. She performed as a fire breather and, occasionally, laid on a bed of nails while a mime did a handstand above her.

“Through that period of my life, I wanted to know, ‘How do other people live? How do I fit into all of this?’” she said. “My mother always told me to get out of myself. I carried that with me. Looking back, that’s what took me from this dark place to figuring out who I was.”

But Weaver-Coleman’s calling was inside her the whole time. Early on, she wanted to be a teacher. As a child, she’d played school with her dolls in her grandparents’ basement. “My uncles on my mother’s side of the family had all studied engineering at Auburn University,” she said. “Even though I didn’t understand what was in them, I used their textbooks to “teach” my toys. And I spent my allowance money on teacher supplies and decorations for my classroom.”

Weaver-Coleman married, had four children, and later divorced. “Before I remarried, I realized that as a single mother, I wanted a better life for myself and family. But the opportunities you have are limited. I worked in elder care. It was exhausting, and I didn’t earn enough to take care of a family. For me, I didn’t feel that it was my destiny. I needed a livable income. I knew that there was a better life for me and it meant I needed to follow through with my dream of becoming a teacher. I want to live a life that helps the world, make a livable income, and be fully present with my family.”

Weaver-Coleman eventually applied to SFSC with her eye to earning a Bachelor of Science in Elementary Education. Initially, she sought assistance through the Student Support Services/TRIO program. TRIO is a federally funded program for first-generation students, low-income students, or those with a documented disability. “I’m a first-generation college student,” Weaver-Coleman said. “With the TRIO program, I can go to any of the advisors and talk with them about personal or academic concerns. They helped me select classes and set goals.”

In her first semester, Weaver-Coleman discovered the Phi Theta Kappa (PTK) honor society and decided she wanted to be a member. After speaking with Dr. Sonji Nicholas, the SFSC PTK advisor, Weaver-Coleman made sure she met the membership requirements. “I fell in love with it and the opportunities it offers. Through PTK, I learned how to be a successful student and successful person.”

In fact, Weaver-Coleman has gained recognition through PTK. She was recently named one of six SFSC students to the 2018 All-Florida Academic Team for academic achievement, leadership, and service to the community. She was also selected as a 2018 Coca-Cola Academic Team Bronze Scholar, receiving a $1,000 scholarship. As one of seven students selected internationally, she received the $1,000 Oberndorf Lifeline to Completion Scholarship that assists PTK members overcome unanticipated barriers to completion of an academic degree. Weaver-Coleman used the much needed funds to repair her home after damage from Hurricane Irma.

Although she has a long list of favorite professors at SFSC, Weaver-Coleman doesn’t hesitate to say that Dr. Sonji Nicholas, sociology professor, is her mentor. “I took Dr. Nicholas’ sociology class my first term in school, before she became my PTK advisor. I go to her office at least once a week. I can tell her how things are going and get advice from her. She’s always encouraging even if she has a lot on her plate. She’s like, ‘Everything is going to be OK.’”

“As a student in my sociology class and as a member of PTK, Erika positively distinguished herself to me as an insightful, knowledgeable, creative, and service-oriented leader with superior ability to analyze problems and formulate solutions,” Dr. Nicholas said. “It is wonderful to see that others see these and other fine attributes that she possesses, as evidenced by the many forms of recognition she has received throughout the year. It has been my great pleasure to get to know Erika and to help her to navigate various aspects of college life while simultaneously planning for the bright future she is destined to realize. I continue to be proud of her well-earned accomplishments.”

“I never imagined that I’d get into college, let alone participate in my first Commencement,” Weaver-Coleman said. “It’s a point of arriving, even though I’m not at the academic end of my destination. It fulfills a promise to myself and my family. I can, certainly, reflect on how far I’ve come.”