English is ‘Something that Really Works’ at SFSC 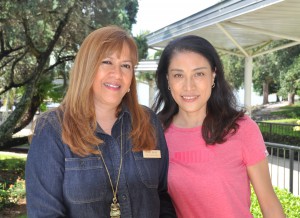 Since 2013, Pinzon has served as the coordinator of the English for Speakers of other Languages (ESOL) program at South Florida State College. She credits her own career success to learning English in an ESOL classroom after she arrived in the United States.

“I studied English in a university classroom in Honduras,” Pinzon said. “It wasn’t the kind of English I needed to get ahead in the workforce.”

After boosting her English skills, Pinzon launched a career in real estate before heading up the ESOL program at SFSC. She’s eager for other non-native speakers to enjoy the same advantage she gained with ESOL.

In a region where data from the U.S. Census show thousands of residents with limited English skills, Pinzon has cast a net to draw hundreds of students to SFSC ESOL classrooms in Highlands and Hardee counties.

“I went to churches, I connected with social services organization, and I visited with employers,” said Pinzon, rattling off a list of some of her outreach efforts to find students who would benefit from ESOL instruction.

“We opened new class sites in Lake Placid, Sebring, and Wauchula,” Pinzon pointed out. “We went right to where the non-English speakers live by starting a class at a housing development mainly populated by residents who once lived in Haiti.”

Monday through Friday, morning, afternoon or evening, students are studying English in an SFSC ESOL classroom.

ESOL is a national effort funded mainly by the federal government to bring English language classes to people whose native tongue is not English. SFSC offers ESOL classes on its Hardee and Highlands Campuses, and at sites in Lake Placid, Sebring, Avon Park, and Wauchula.

The classes meet three to four days each week, depending on the location. At the outset, instructors guide new students through a two-hour assessment to determine their level of proficiency. Then students work at their own pace learning not only English but how to adapt to American society.

“Our work does not stop with teaching students basic communication skills,” Pinzon said. “Our ultimate goal is to get them fully integrated into the American way of living, and, hopefully, become U.S. citizens.”

Pinzon noted that once students score in what ESOL parlance is known as the “high intermediate” level, they can start preparing for the citizenship interview.

“We work with the students on completing the application, learning U.S. history, civics, and national symbols,” Pinzon said. “Our aim is to see them pass question citizenship test.”

Pinzon knows what it takes to get through the entire process. She arrived in the United States in 1985, after leaving Honduras with her American husband.

“When I was student at the University of Honduras, I became familiar with an American family that had moved to Honduras to manage a family-owned business,” Pinzon said. “I wound up marrying one of the sons, and we lived in Tegucigalpa [the nation’s capital city] for several years before moving to Tampa.”

Pinzon recounted that she had studied English while a university student, but felt overwhelmed on her arrival in Tampa. She enrolled in ESOL classes offered by the Hillsborough County school district.

She later moved to Highlands County, where she worked in real estate. But Pinzon said she always had a desire to teach and, in doing so, learn more about other cultures.

When the real estate market collapsed with the housing bust, Pinzon landed a job teaching adult education classes part-time at SFSC. But she had her sights set on working with ESOL students.

Pinzon’s break came in 2013, when the then current ESOL coordinator took another job, giving her a chance to step in and take the reins of a program.

“Carol brings a perspective and approach to her work that makes her particularly successful connecting with our students,” said Benjamin Carter, Director Outreach and Academic Support at SFSC, who works with Pinzon in the Adult Education department. Carter attributes Pinzon’s experiences to her success in managing SFSC’s ESOL program.

“Her background as a former ESOL student, as well as an Adult Education instructor, who knows the ups and downs of adjusting to life in the U.S., gives her an understanding and empathy for the struggles our students face each day.”

Pinzon prefers to strike a note of humility, giving credit to much of the program’s success to a staff of dedicated instructors and “amazing volunteers” who work with students from varied backgrounds.

“Many people have the mistaken impression that ESOL is just for Spanish-speaking people, and that’s just not the case,” she said. “We have students from Russia, China, and Brazil, some of whom were doctors and engineers in their home countries but need to learn English to succeed here.”

When she’s not overseeing the SFSC ESOL program, Pinzon darts down to Fort Lauderdale on weekends to spend time with her two grandchildren.

“For me, spending time with my grandchildren is what gives me the greatest satisfaction in life,” she said.

But Pinzon has dozens of photographs on her office wall that are not of her grandchildren, but of students who have learned English in SFSC ESOL classes and gone on to college or rewarding careers.

“ESOL is something I really believe in,” Pinzon said. “Some people ask me why. I tell them because it something that really works.”

To learn more about ESOL classes at SFSC, contact Pinzon at 863-784-7380 or pinzons@southflorida.edu.