Math at SFSC Sparks a Career in Engineering

AVON PARK, Fla. – Oct. 4, 2016 – If you’ve driven along the roads and bridges connecting Polk County with Florida’s Nature Coast, then you have a connection with Sarah Futral. 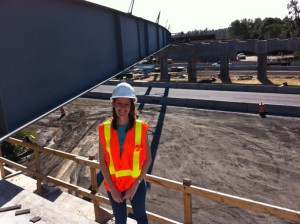 Sarah Futral at a bridge site under construction in New Tampa.

“If someone had told me during my time at SFSC that I would be designing bridges, I wouldn’t have believed them,” Futral said. “In fact, when I arrived at SFSC, I had no idea what path my career would take.”

The Frostproof native graduated from Walker Memorial Academy in Avon Park and enrolled immediately as a full-time student at SFSC. Futral took college credit classes on the Highlands Campus as a dually-enroll student while at Walker, so she already knew her way around campus,

“I chose SFSC because I went to a small high school, and SFSC’s modest-sized student body appealed to me,” Futral said. “What’s more, I found out early that the small size translated into more individualized attention from the faculty and the advising staff.”

Futral noted the extra attention had its benefits. She said the advisors and counselors had the time to sit down with her and explain what prerequisite classes she needed to take before transferring to a university.

“That the advising staff were readily available was key for me,” she added. “I also made use of the SFSC Career Development Center, which helped me tremendously.”

Despite all the advice, Futral was still undecided. She hadn’t settled on an academic trajectory leading to a career. It took a trigonometry class and one engaging professor to steer Futral toward engineering.

“When I registered for trigonometry, I was thinking about a career in architecture,” she said. “But learning trigonometry under Professor McBride showed me that I could master a complex analytical subject and come to love it at the same time,” said Futral, referring to James McBride, who teaches math on the SFSC Highlands Campus.

Futral explained she had enjoyed math but McBride taught the usually difficult subject in an engaging manner that had her rethink her career choice.

“Once I delved into math, I began to gravitate toward engineering,” Futral said. “I discovered my mind had a practical bent.”

“It came to me that I didn’t want to decide what would be built but how it should be built.”

Just as she had chosen SFSC because of its modest size, Futral opted to attend Florida Gulf Coast University to enroll in its new civil engineering program.

“Even at a campus of Florida Gulf Coast’s size when compared to the larger university I could see how a student could become a small fish in a big sea,” Futral said. “There’s definitely something to be said for starting out at a place like SFSC where one gets more attention early on.”

After earning her Bachelor of Science degree in civil engineering, Futral set off for the University of Florida, where she completed her master’s degree, specializing in structural engineering.

She scored an internship with Kisinger Campo, working on transportation projects. The firm hired Futral at the end of her internship.

“I will have been with Kisinger Campo for five years this October, and it’s been a great five years,” Futral exclaimed.

As a structural engineer specializing in transportation projects, Futral works as part of a team designing bridges and overpasses for the state and local governments. One recent project included designs for replacing four bridges spanning Clearwater Harbor.

After four years of supervised work under a professional engineer, Futral was eligible to sit for the licensing examination to earn her professional license.

“This past December, I got the good news,” she said. “I passed the test, and I now have my professional license.”

With her career on solid ground, Futral has been making other plans. She recently announced her engagement and plans a fall 2017 wedding.

“I can think back now to my time at SFSC and recall being undecided about my major,” Futral said. “When I graduated, I thought would design buildings. But now I design bridges, and I love it.”

“You never know what you’re going to fall in love doing until you try doing it,” Futral said.