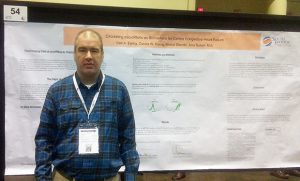 Carl Ewing with research project results poster at the conference

AVON PARK, Fla. – May 1, 2019 – Faculty at South Florida State College (SFSC) have included students in research projects to help prepare them for eventual STEM (science, technology, engineering, and mathematics) careers. In fact, three SFSC students recently presented research on micro-RNAs and their role in canine congestive heart failure at the Experimental Biology Annual Conference in Orlando. Experimental Biology (EB) is an annual meeting of more than 12,000 scientists and 25 guest scientific societies from all over the world for the purpose of networking and sharing research.

Kristal Shands, Kye Ewing, and Carl Ewing have been research students working with Amy Bohan, SFSC biology instructor, over the last academic year. They have been working in the lab to isolate micro-RNAS from canine plasma to determine their role as an early detector of congestive heart failure.

According to the RNA Society, ribonucleic acid (also called RNA) is one of the three major biological macromolecules that are essential for all known forms of life (along with DNA and proteins). Bohan explained that micro-RNAs are small molecules of RNA that will not be translated into protein and are thought to be involved in gene expression regulation. 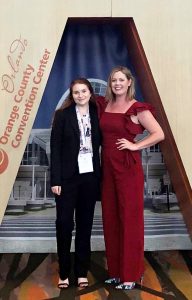 The students presented their preliminary data in the poster section of the EB conference, where they explained to judges and fellow undergraduate and graduate students how they performed their research and the significance of their findings.

Bohan’s inspiration for the student research came from her paper recently published while working toward her Ph.D. at Auburn University. “It was based on a study that was ongoing at Auburn and one that was particularly near and dear to my heart—it had an impact on the well-being of animals. You see, I have four dogs. And so, I wanted to recruit students to help me with the project.”

According to Bohan, research is an important component in the science curriculum at a state or community college because “it gives the students an opportunity to think outside the classroom. My students have to review journal articles and discuss them. They get hands-on experience in lab techniques—they learn how a lab works and how to perform these experiments. It prepares them for university-level work, and it gets them thinking about which area of science they are interested in.”