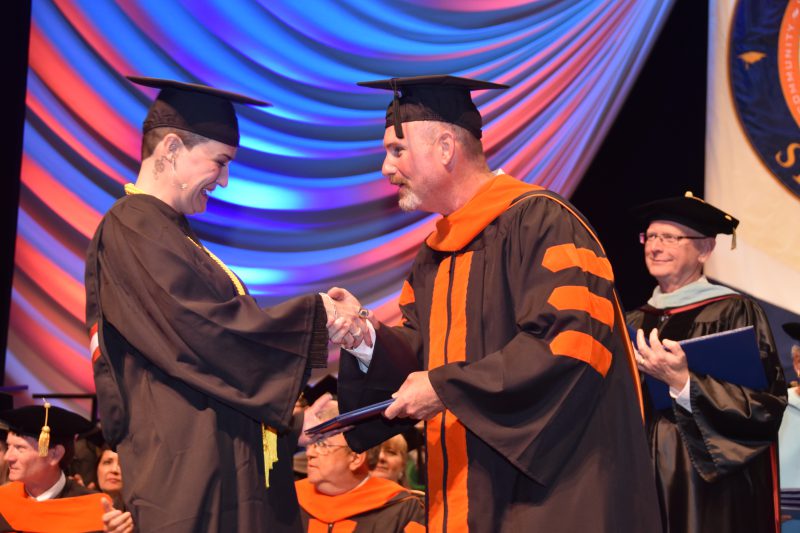 AVON PARK, Fla. – May 5, 2017 – “We have been trained and tested. We have proven our abilities to our instructors, to our loved ones, and most importantly to ourselves. We made it! We made it not to the end but to the beginning: the beginning of a new chapter that we must each write in our own lives.”

These parting words from South Florida State College graduate Steven Cullipher reflected the sentiments more than 400 of his fellow Panthers as they collected diplomas, certificates, and degrees during Thursday’s Commencement services at the Alan Jay Wildstein Center for the Performing Arts.

Cullipher, who accepted his Bachelor of Applied Science degree in Supervision and Management (BAS-SM), was the keynote speaker at a service honoring students who received State of Florida high school diplomas and those who earned certificates, Associate in Science (AS) degrees, Bachelor of Science degrees in Nursing (BSN), and BAS-SM degrees through the Division of Applied Sciences and Technologies and the Division of Health Sciences. Emily Swenson, who earned her Associate in Arts (AA) degree, was the keynote speaker at a service honoring graduates who received AA degrees and Bachelor of Science degrees in Elementary Education (BSEE) from the Division of Arts and Sciences.

A native of Plymouth, N.C., Cullipher had a career as a theatrical lighting designer before earning his SFSC AA degree in 2015. Now working as an elementary school paraprofessional, he plans to apply for his teaching certificate and pursue a master’s degree.

Originally from Orange Park, Swenson was recruited to play the right setter position for the Lady Panthers’ Volleyball team. In addition to being the team’s co-captain, Swenson was elected president of the Student Government Association (SGA) and was named the 2017 Panther of the Year by the Athletic Department. She is heading off to the University of Central Florida (UCF) to study broadcast journalism.

“Any dream is truly attainable with hard work, confidence in your ability, and dedication to what you are trying to achieve,” Swenson said.

Some 466 students met the SFSC graduation requirements for the spring Commencement. Of these, 212 received AA degrees, 68 received AS degrees, 132 received occupational or college credit certificates, and 21 received their State of Florida High School diplomas.  Fourteen received a BAS-SM degree, 13 earned a BSN degree, and six earned a BSEE degree.

Derren J. Bryan, chair, SFSC’s District Board of Trustees, spoke to graduates of the Division of Arts and Sciences about their accomplishments and the challenges that lie ahead. “For most of you, especially your parents, it may be a major dream come true. For you students, it’s an accumulation of long hours and sacrifices. It’s about setting a path, making adjustments when needed, but enduring forward into our world. Whether it be continuing on with your education, entering the workforce, or perhaps both, I speak for all of us here on this stage tonight, that we are so very honored and blessed to have had a part in your journey.” On Bryan’s behalf, trustee Timothy Backer delivered the identical message to graduates of the Division of Applied Sciences and Technologies and the Division of Health Sciences.

SFSC President Dr. Thomas C. Leitzel charged graduates to “go forth, find your corner of the sky, and do amazing things.”