Student Commencement Speaker Has High-Flying Plans for His Future 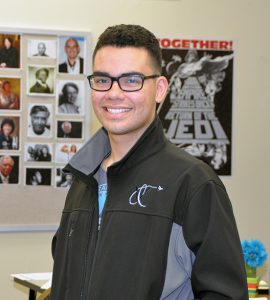 Luis Rodriguez will approach the podium as student speaker during South Florida State College’s (SFSC) 7:45 p.m. Commencement ceremony on Thursday, May 3, at the Highlands Campus in Avon Park. He recently turned age 18 and will receive his vocational certificate in applied cybersecurity. This will be his second certificate from SFSC. In December 2016, he earned a college credit certificate in network security.

“Commencement is the beginning of a new life, a new you,” he said. “You come to college as one person, and you walk out as a whole other person. You have a sense of accomplishment and pride. It gives you a sense of meaning and worth.”

But Rodriguez’s academic life is not over yet. On May 19, he graduates from Sebring High School. Further, he is only three courses shy of earning his Associate in Science degree in network security, which he plans to complete this summer.

College, for Rodriguez, began with the Highlands Career Institute (HCI) at SFSC. Through the HCI, high school students earn a high school diploma while working toward an occupational certificate or earn college credit. Students spend half a day taking high school classes and the second half of the day in college classes alongside adult college students on the SFSC Highlands Campus. By the time they graduate from high school, most students have earned an occupational certificate and are ready to enter the workforce or continue on a career pathway at a college or university. Because HCI is considered dual enrollment, costs are waived for tuition and books.

“I knew that I wasn’t going through college without financial assistance,” Rodriguez said. “So, coming to HCI at SFSC gave me a head start with no out-of-pocket costs. My mother had earned a degree, and I saw how she had student loans. She just recently paid them off.”

Even at a young age, Rodriguez has his future planned. “Right now, my goal is to become a penetration tester, which is a hacker that companies hire to audit their networks,” he said. “They purposely break their network systems to strengthen them and make them more secure. They use the same tools as an attacker.”

Eventually, he would like to enlist in the U.S. Coast Guard. “They’re starting a cybersecurity and intelligence division,” he said. “You get training and your education is paid for. Besides, I find the idea of fighting pirates really cool.”

Another possible route within the Coast Guard Rodriguez has considered is to fly helicopters. “I want to go into Information Technology (IT) and enlist in officer candidate school. Then, I want to be a helicopter pilot. I don’t know if that’s going to exactly work, but that’s how I see it in my head. In the Coast Guard, you have to be an officer to be a pilot.”

In the meantime, Rodriguez is working toward his pilot’s license. A volunteer spot during the U.S. Sport Aviation Expo at the Sebring Airport nurtured his childhood dream of becoming a pilot. “I volunteered to help set up and take things down during the Expo,” he said. “I became mesmerized by the atmosphere and got bitten by the aviation bug.”

“Flying was a childhood dream of mine,” Rodriguez said. “Becoming a pilot requires 40 hours of flight time. I now have 20 hours. To earn your pilot’s license, you also have to take a three-part exam and I’m cramming for the written portion now. I anticipate being done in June or July. It’s a great feeling to make your dream real. If I could talk to myself as a child right now, I’d high five myself.”

“I didn’t think I’d make it in college,” Rodriguez said of his experience at SFSC. “The stigma that college is hard and you’ll be staying up late hours of the night, only some of it’s true. The reason why some people don’t succeed is because they don’t have the self-discipline. If you go into it with the mindset that you won’t do well, then you won’t. After I told myself not to think that way, college became an easier experience. But college is not only about academics, it’s about making new friends, connections, and getting in touch with professionals in their industries.”

“I had the pleasure of having Luis in many of my courses over the past three years,” said Brian Bohlman, professor of computer networking technology at SFSC. “From the first day of class, Luis impressed me with his willingness to tackle difficult concepts and curriculum with a true ‘can-do’ attitude. Luis is a talented individual and natural leader who has my highest respect and encouragement toward his future studies and his cybersecurity career. Luis is going to do great things, and I will surely be following his progress closely.”