Student to Speak of her Affection for SFSC at Commencement

AVON PARK, Fla. – April 19, 2017 – Emily Swenson likes South Florida State College so much, she wants to come back after she earns her bachelor’s degree. 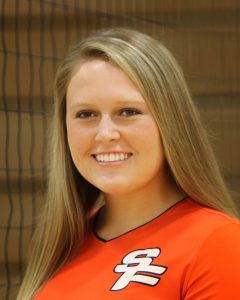 “I cry when I think about leaving SFSC when I graduate in May,” Swenson said. “There’s something special about the college that got me telling the dean of Student Services, Dr. Wise, I wanted to come back here to work.”

But Swenson is unlikely to act on that whim. She has her sights set on a career in broadcast journalism, one she hopes will see her on TV in a major metropolitan market.

Swenson will tell of her love for SFSC, who at the college spurred her to excel, and her plans for the future when she delivers the student Commencement address at SFSC’s graduation ceremony on May 4, 7:45 p.m., in the Wildstein Center on the Highlands Campus in Avon Park.

It was volleyball that brought Swenson to SFSC. As a young girl, she took up the game through the YMCA and, under the tutelage of the same coach, continued playing through to her years at Middleburg High School, a short drive from her family’s home in Orange Park, Fla.

“SFSC was the first to offer me a volleyball scholarship, so I accepted straightaway,” Swenson said. “My dad drove me down and, as the landscape grew increasingly more rural, I said ‘Am I going to like this place?’”

As Swenson tells it, her worries were soon put to rest. She fell in easily with her volleyball teammates. Swenson, at 5 feet 11 inches, plays right side hitter for the Lady Panthers. Her team spirit and easy going personality led to her selection as the team’s co-captain.

“I’ve always been outgoing and enjoyed being out in front of people,” Swenson said. “Way back in elementary school, I served as the anchor for our in-school TV news program that was broadcast to the classrooms.”

Fittingly, among Swenson’s favorite classes at SFSC was Fundamentals of Speech Communications, a course required of all students and dreaded by many. “I went into this course knowing I would learn a lot I could use down the road,” she said. “The instructor, Lynn MacNeill, fulfilled my expectations. He broke down all the key concepts, giving the students the do’s and don’ts.”

With encouragement from Andy Polk, SFSC’s coordinator of Student Life, Swenson ran for election to a post in the Student Government Association (SGA) in her first year on campus. She won a spot on the SGA executive board, overseeing public relations.  At Polk’s nudging, she sought higher office in her sophomore year, gaining the support of her colleagues to become the SGA president.

During her tenure, Swenson served as the voice of the student body and as a liaison with faculty and administration, promoting educational and social student activities aimed at fostering an engaged student body.

So, it was only natural, Swenson, thought, to put herself out front one last time. She threw her hat into the ring when it came time to choose a student Commencement speaker. Her leadership and achievements on campus persuaded the organizing committee they had found their speaker.

For her part, Swenson lauds Polk for his support. “Andy Polk saw in me an ability, and he gave me the confidence to run. I’ve come to learn that at SFSC, with encouragement you get from the instructors, the coaches, and folks like Andy Polk, you can open door after door, each leading to something rewarding.”

What Swenson sees as ultimately rewarding is a career in broadcast journalism. She will enroll in the University of Central Florida this fall and begin working toward a degree in the university’s Nicholson School of Communication. She has a hankering to get in front of the camera, either reporting the news or anchoring a show.

First, though, she and a fellow SFSC student will make their way to Haiti this summer for an eight-day mission trip as part of a church’s outreach to help residents on the impoverished Caribbean island.

With just a few weeks before she’ll take to the stage to deliver her address to the students she led as their president and their families, Swenson is putting her remarks in their final form.  “I want the speech to say who influenced me, who made my time here at SFSC so special, and leave a message for those going on to university and the younger people in the audience who will soon go to college.”

Swenson said her message to the students, those moving on and those who will take their place at SFSC, will mirror the advice she has given in her role as SGA president to new students during the college’s regular orientation sessions.

“I wouldn’t cherish my time at SFSC as much as I do now had I not gotten involved with life on campus,” Swenson said. “When you get involved, you feel invested, which makes your time here all the more rewarding.”