The graduates had just completed an 11-month college credit certificate course offered by SFSC’s paramedic program. Paramedics work as part of an emergency response team called out to traffic accidents, fires, and other life-threatening situations. 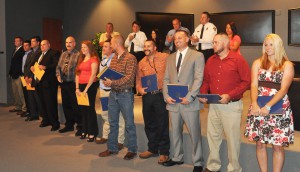 Randy Chancey, a recently retired paramedic instructor at SFSC, served as the ceremony’s guest speaker. Chancey, who was one of the first instructors in SFSC’s paramedic course, offered his advice to the graduates.

“This job is about people,” Chancey said. “It’s about people who depend on you and the very best you have to offer.”

He called upon the graduates to remember the people they encounter in emergencies are often ordinary people going about their days in the most ordinary of ways. Ordinary, Chancey said, until disaster strikes.

“Lives hang in the balance based on how you respond to their emergency,” he said.

Steve Ashworth, chair of the Emergency Medical Services and Fire Science programs, presented Chancey with a plaque for his service and dedication to SFSC’s training program.

“Randy Chancey has been a stalwart part of our training program,” Ashworth told the graduates. “He is the one who made possible this paramedic program, which is an outstanding one.”

Bilie Kay Williams earned awards for highest grade point average in classroom work and in the laboratory. Robert Allen Goudy received the “Most Heart” award for his dedication. Michael Gene Kennedy took an award for displaying the highest level of professionalism. All three work with the Polk County Fire Department.

SFSC also offers a two-year Associate in Science degree program in Emergency Medical Services, which includes training in both EMT and paramedic programs.  Upon completing this program, graduates can work in a supervisory EMS capacity.

For more information, contact Steven Ashworth, at 784-7272 or ashworths@southflorida.edu.

William Starrett, artistic director of Columbia City Ballet, will conduct local auditions on Saturday, Aug. 29, beginning at noon, at the SFSC Theatre for the Performing Arts, Highlands Campus. “Many roles are available, from mice to soldiers to candy canes and more,” Garren said. Dance and gymnastics experience is not required, although it is preferred, and children must have completed kindergarten. “This is a wonderful opportunity for local children to perform onstage with a respected, professional company in a beautiful production,” Garren said.

Children should wear leotards, tights, and ballet shoes or shorts and a plain white T-shirt with comfortable shoes. Sandals or flip flops are not permitted. No fee is required for auditions, but all children cast in the production must pay a small costume rental fee which covers cleaning and repairs.

Rehearsals will be held on Saturday mornings beginning in November. The final rehearsal schedule will be presented at the auditions. A final dress rehearsal will be held during the day on Tuesday, Dec. 8 and all children are required to attend. The Nutcracker will be performed at 7 p.m.

A parent meeting will be held at noon prior to the auditions on Aug. 29, in the SFSC Theatre for the Performing Arts. Children without a parent or adult chaperone in attendance will not be permitted to audition.

For more information or to get an audition form, go to sfscarts.org.   If you have any questions, please email culturalperformances@southflorida.edu.   Please do not call the SFSC Box Office which is closed for the summer.

SFSC Dental Assisting program graduates on stage at the University Center auditorium after receiving their pins.

The graduates had just completed SFSC’s 16-month occupational certificate program in dental assisting. They can now work alongside a dentist as a member of a dental health care team.

Keynote speaker Norine Dowd, a dental hygienist with 27 years of experience and an adjunct instructor at SFSC, congratulated the graduates for their commitment to academic success.

“Each of you has so much potential,” Dowd said. “We have never had a more successful class. You are setting class records with your rate of passing the certification examinations.”

Before pinning each graduate, Milliken recited the poem “Heartprints,” an inspirational verse by an unknown author. Playing off the notion of leaving one’s fingerprints on whatever object is touched, she urged the graduates, by acts of kindness and concern, to leave prints of their hearts on the patients they touch.

Then, Bobby Sconyers, SFSC’s professor of dental assisting, called up each graduate to accept their pins from Dr. Milliken.

“These graduates were the hardest working class I’ve had,” Sconyers said. “They have accomplished more than any other class.”

For more information on the dental assisting program, contact Bobby Sconyers, at 863-784-7022 or email him at sconyerb@southflorida.edu.

In a break with a practice that calls for a faculty member to present the pins, Junior Gray, SFSC’s radiography program director, called family members up to the stage to pin their loved ones. 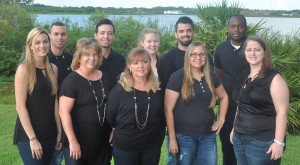 Husbands, mothers, and fathers, to the applause of the audience, accompanied the graduates to the stage to affix the pin to their shirts and blouses.

The graduates had completed SFSC’s radiography program and will soon sit for the national board examinations, aiming to start their careers later this summer. Radiologic technologists work in hospitals and clinics performing diagnostic imaging examinations, such as x rays.

James Switzer, a radiologist at Highlands Regional Medical Center, who helped teach clinical skills to the graduates, offered words of advice as they prepare to launch their careers. END_OF_DOCUMENT_TOKEN_TO_BE_REPLACED

AVON PARK, Fla.–July 13, 2015–For four South Florida State College agriculture students, a trip to Orlando this month was the payoff for their investment in agricultural education.

The SFSC students traveled to the Florida Future Farmers of America state convention to pick up their American FFF Degrees. The American FFA Degree is the highest award a student can earn from the organization. 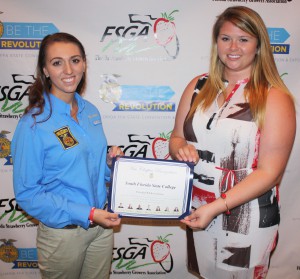 To attain the award, FFA members must earn at least $10,000 and invest $7,500 in an agricultural project, demonstrate outstanding leadership skills, maintain a record of academic achievement.

“This is a significant achievement for our students,” said Kevin Brown, dean of SFSC’s applied sciences and technologies division. “Only 0.05 percent of all FFA members earn this award, making it one of the organization’s most coveted honors.”

The awards come just as SFSC received its chapter charter from FFA, marking 2015 as the first year the college sponsored a chapter.

The Florida FFA Association is the state’s major youth and leadership agricultural organization, with more than 17,000 member in 300 local chapters. FFA members participate in nearly 50 leadership and career development events each year.

Brown said SFSC plans to step up efforts to boost FFA membership as part of the college’s push to enhance its agricultural education offerings. 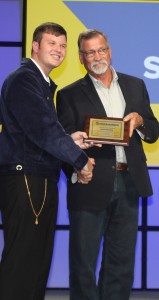 He said there are about 25 students in the college’s two-year degree and college credit certificate agricultural programs, with 15 of them active in FFA.

Parents can enroll children in one of two camps to be held on SFSC’s Highlands Campus in Avon Park: Robotics or Master Builder. Both camps start at 9 a.m. and end at 3 p.m., with pickup no later than 3:30 p.m.

This camp will teach children the building tips and techniques from LEGO’s best designers and builders – the LEGO Master Builders.

Children will learn the secrets behind the popular builds they’ve become familiar with. This camp will feature stable building techniques to micro design to wheeled autos.

The curriculum used for all camps is based on content from LEGO® Education. Instructors from iBrick Academy will lead all camp sessions.

To register for these camps, visit ibrickacademy.com.

The registration fee for the camp is $219 and includes snacks, tee shirt, and a bag of fun stuff. Children must bring their own lunch. A refrigerator is available to store lunches.