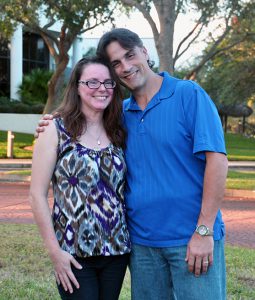 AVON PARK, Fla. – Dec. 12, 2017 – Angelo and Coren Russo have been married for five years and are a testament to teamwork in every sense. Over those five years, they’ve been working on degrees at South Florida State College (SFSC). During SFSC’s Commencement on Thursday, Dec. 14, the Russos will earn their Bachelor of Applied Science degrees in Supervision and Management (BAS-SM). In fact, Angelo is the college’s student Commencement speaker.

“I always wanted to have a degree,” Coren said. “I had children first, and then I wanted to accomplish something else. I wanted an associate degree, but then I thought, ‘Let’s keep this going.’ Now that I have my bachelor’s degree, I’m feeling like ‘Let’s keep this going.’ I’ve been tossing around the idea of database administration. I want a master’s degree in something just to say I could.”

“Coren started college to better herself, so she encouraged me to go as well so that we were each other’s rocks in this effort,” Angelo said. In fall 2014, he received an Associate in Science degree in computer information systems, and Coren earned her Associate in Arts degree from SFSC.

For many students, college, work, and family become a balancing act. “We missed out on family and friend get-togethers and some holidays,” Angelo said. “We both took three courses while working full time. You have to give up some of your life when you go to college. It requires a sacrifice in some areas of your life, but it’s worth it in the long run.”

As a previous non-traditional student, Dr. Tina Adams, lead instructor for the BAS-SM program, understands the challenges students face as they attempt to balance academics, work, and family. “This couple did an excellent job supporting each other and making sacrifices when necessary to ensure that they successfully finished the program,” she said.

The support for each other throughout their academic careers was invaluable. “Coren and I would quiz each other on the way to the campus,” Angelo said. “We bounced ideas off of each other for some of our class projects.”

“We wouldn’t let the other one procrastinate,” Coren said. “If one of us wanted to watch TV or go out to dinner, Angelo or I would finish writing our assignment for class first. We held each other accountable.”

Coren indicated that she and Angelo had a particular BAS-SM class together in which Dr. Adams separated them because, “Apparently, Angelo and I are both strong leaders. We’re both Type A.”

“There were times I wanted to quit,” Coren said. “But not because of school.” Coren’s father passed away a few years ago, she lost one of her best friends, and her best friend lost her father. “I needed to focus on something, so I took the semester off. Dr. Adams was definitely a positive influence. She told me that I could take some time off, but that I must come back to finish the program.”

Although Angelo could have graduated in May 2017, he held off and waited to graduate with Coren. The final course in the BAS-SM program, the capstone course, was coming up and they wanted to take the class together. “We heard that people were stressing out about it, that the projects are crazy hard,” Angelo said. “But it’s not. It’s just that the structure of the class is different from others. We had to create a strategic profile of a company—what problems they’re having, pick a problem, do research, surveys, and make recommendations on how to fix the problem. Every class we’ve had throughout this program, everything we’ve learned is rolled up in the capstone course. It helped me develop leadership skills and to work with groups and teams to find a solution to a problem.”

Although Angelo’s final GPA in college classes is 3.94 and Coren’s is 3.65, they never considered each other academic rivals. “We wanted to show our son, Ronnie, the importance of good grades because he had a problem with grades when he was younger,” Coren said. “We wanted him to have something to be proud of, something that he accomplished, with a little nudge from us.”

Apparently, the Russos inspired their son. Currently, Ronnie takes honors classes and college classes at Atlantic Technical College and High School in Broward County. He has a 4.14 GPA.

After graduation, Angelo will continue to work in the Information Technology Department at the Avon Park Correctional Institution, and Coren recently accepted a position as a project manager with a company in Fort Myers, Fla. For the time being, she and Angelo simply want to enjoy life. “I want to read books that I choose, not assigned reading, and play my video games,” she said.