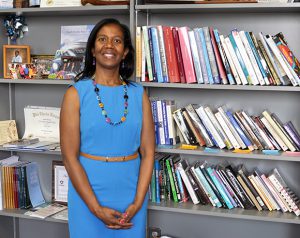 AVON PARK, Fla. – May 29, 2018 – Dr. Sonji Nicholas, professor of sociology at SFSC, loves to travel. Through her life experience, Dr. Nicholas has connected her students with the world and nurtured cultural relativity.

“I was born into a traveling family,” she said. “My parents are Jamaican-American and were part of the Windrush generation.”

A post-World War II immigration boom in the United Kingdom began in June 1948 when the passenger ship, the Empire Windrush, arrived in England from Jamaica, carrying 492 immigrants in search of employment and prosperity. Because of a labor shortage between 1948 and 1971, the United Kingdom encouraged immigration from Commonwealth countries to help rebuild the country. Many people came from Jamaica, Trinidad and Tobago, and other Caribbean countries.

“My parents had known each other in Jamaica, got re-acquainted in England, and were married in London in 1960,” Dr. Nicholas said. “My dad went into the Air Force and my mom attended nursing school. I was born there, and we lived in England until my parents decided to return to Jamaica. On the way back, our ship stopped at 18 different locations, such as Trinidad and Venezuela. That’s probably how my interest in travel got started.”

In the early 1970s, Dr. Nicholas’ parents headed for the United States, where they felt they had better job prospects. The family settled in West Nyack, N.Y., where she grew up.

Dr. Nicholas went on to earn her Bachelor of Business Administration from Howard University in Washington, D.C. and took a job as an insurance adjuster right out of college. But underneath it all lurked an interest in sociology. “My history of moving around and living in different cultures may have sparked it,” she said. “I studied business as the practical side of me. But all along, I took electives in social and behavioral sciences. I was studying a lot of African history, while at Howard University. Then I studied on my own and with groups in the community.”

With her African history study group, she took her first of four trips to Africa, visiting the countries of Senegal and Gambia. The location that most moved Dr. Nicholas was Goree Island, off the coast of Dakar, Senegal’s capital city. This UNESCO World Heritage site is known for its role in the 15th to 19th century slave trade. On the island is the Maison des Esclaves, or House of Slaves, where an estimated 20 million Africans captured for enslavement were held before being shipped to the New World.

“I got to see this structure and got a sense of how those who were captured lived, sometimes up to a year,” Dr. Nicholas said. “It was impactful to be in those quarters and imagine what it was like for my ancestors. Women were kept in one room, men in another, and children in another. The windows in the rooms were triangular with a small opening for air. They left through the ‘Door of No Return’ and walked a plank that lead out to a ship.”

She also traveled to northern Senegal to visit the Grand Mosque of Touba, one of the largest mosques in Africa. “Senegal is 90 percent Muslim,” she said. “Upwards of one million Muslims from West Africa make their pilgrimage to the Grand Mosque of Touba annually. It is a beautifully constructed edifice, and worshippers consider this site to be their Mecca.”

“In Dakar, I got to experience the differences in culture from our own, things we take for granted,” she said. “I was struck by the level of religiosity. I went to a bank to exchange money one day at 11:30 a.m. When I got to the bank, I was surprised to find it locked. It turned out that bank managers closed shop for a few hours to allow employees to participate in mid-day prayer.”

Dr. Nicholas continued her academic studies, and was awarded her Master of Arts in African Studies from the State University of New York at Albany, and her Master of Philosophy and her doctorate in Sociology from The Graduate Center of C.U.N.Y.

She went on to teach sociology as adjunct faculty at what is now Florida Southwestern State College in Fort Myers, Fla. and took a position as program manager for the Florida Department of Health’s Healthy Families program. “Healthy Families is a parenting education program that’s based on sociological research. Thirty years of research has shown that by working with families who are expecting a baby and providing them information about early childhood development, brain development, and child safety significantly helps to prevent child abuse and neglect.”

Dr. Nicholas is currently a member of the Highlands County Healthy Families advisory board and encourages students in her sociology classes at SFSC to get involved. “When we get to the unit on Family in class, I ask representatives from Healthy Families to talk with the students about the organization’s mission and how it works with families. The presentations give students a connection to what we’re studying and provides an example of how sociological knowledge can be applied in work settings.”

In spite of a vibrant academic career, Dr. Nicholas’ love of travel has never gone astray. She’s visited many locations in the Caribbean, Africa, Central America, North America, and Europe. “I haven’t been to Asia, but it’s on my list,” she said.

In fact, Dr. Nicholas had an opportunity to re-visit Senegal in summer 2016, when she was selected to participate in the prestigious Fulbright-Hays Seminar Abroad program.

The Fulbright scholarship program was established in 1946 under legislation introduced by Sen. J. William Fulbright of Arkansas. “Sen. Fulbright was interested in cultivating peace around the world through understanding,” Dr. Nicholas said.

Along with 15 other scholars, Dr. Nicholas visited Senegal for six weeks, focusing on religion and diversity in West Africa. “That was right up my alley,” she said. “It had close to 30 years since I’d last been in Senegal.”

“One of our leaders was an anthropologist of Senegalese heritage who was with the Boston University African Studies Center,” she said. “We had lectures at the West African Research Center in Dakar, toured places of worship, and visited towns and rural areas.”

Upon her return, Dr. Nicholas was required to develop a curriculum project that integrated seminar materials into sociology courses that others could use in their own classes over an entire semester. In addition to submitting her project to Fulbright, she made a presentation about it at the Alpha Kappa Delta/Cengage Teaching and Learning Workshop held at the 2017 annual meeting of the Southern Sociological Society. She plans to share some of this information at the upcoming National Institute for Staff and Organizational Development (NISOD) conference in Texas. NISOD celebrates excellence in teaching, learning, and leadership at community and technical colleges.

“When I returned to Senegal for the Fulbright program, I was interested to see how things have changed, particularly the impact of technology in that country,” Dr. Nicholas said. “Now, everyone has a mobile phone; people are able to start businesses and communicate with the wider world with much greater ease. While there, we also visited universities, and I made good connections at those universities.”

Dr. Nicholas extended her experience to students enrolled in her Honors course the semester after she returned from Senegal. “I had them do a global pen pal project,” she said. “Each of the students was paired with a university student in Senegal. The Honors Interdisciplinary Seminar class was called ‘Marriage and Families across Cultures’ with a focus on Senegal. Over the course of the semester, the students got to know their global pen pals. They would ask about their pen pals’ families and learn how they are similar and different from their own.”

“My students were able to link up with people from across the globe, get directly connected, make new friends, and learn about other people who normally wouldn’t be on their radar,” she said. “With technology, it was possible for my students to experience this. It couldn’t have happened that way 20 years ago.”

In her Introduction to Sociology class, Dr. Nicholas emphasizes culture and how groups influence individuals. “I often draw on my travels,” she said.

“In my classes, we spend a lot of time talking about awareness,” she said. “We need to recognize social context to better understand why people do what they do. We need to step into other peoples’ shoes and understand the bigger picture of their lives and develop a sense of cultural relativity. We’re a nation of immigrants. We have to be aware that others don’t always do things as we do things. We need to be less judgmental and more understanding in our increasingly globalized society.”