AVON PARK, Fla.–June 1, 2015–After 40 years working at South Florida State College, Dean Jordan finally got promoted to dean, and she had to wait until her last day on the job for the honor.

Pamela “Dean” Jordan’s retirement from the college’s business office brings to a close the career of the college’s third longest serving employee and an end to a long-running gag that tripped up many a new employee.

“We all called her by her middle name, Dean,” said Anita Kovacs, SFSC controller and Jordan’s supervisor. “But when new employees came by with an invoice, we’d tell them that needs Dean Jordan’s approval, and they’d get flustered thinking they’d have to see to a college dean for approval.”

It was only fitting, then, that as coworkers mustered in the college’s board room to bid farewell to Jordan, they would surprise her with a certificate declaring her an honorary dean. 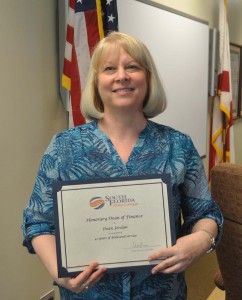 Despite the awe her name might instill in the new hires, coworkers saw her in a different light.

“Dean is one of the most personable employees I’ve worked with here,” said Lynn MacNeill, SFSC’s professor of communication, who has worked with Jordan since her hire in 1974. “From her first day on campus until this day, she has always been the easiest person to work with.”

Before her retirement, Jordon, like MacNeill, was in line to take on the role of ROC, or resident old codger. A title college employees give to the longest serving employee, a role now held by Don Appelquist, who started with SFSC in 1970.

“I started here when I was 20 years old, and it’s the only placed I’ve work since,” Jordan said, as coworkers milled about the board room sharing stories about their time working with her.

When Jordan started, the college was a collection of small buildings lining the shores of Lake Glenada. Now nearly 3,000 students attend classes in two dozen buildings stretching across the college’s 228- acre campus in Avon Park and satellite campuses in Lake Placid, Hardee and DeSoto counties.

She served as an assistant to the college’s first president, William Stallard and ended her career as the coordinator of accounting.

Her comments echoed the findings of a recent report handing top marks to SFSC for its work environment. SFSC was designated a Most Promising Place to Work based on the results of nationwide survey conducted by the National Institute for Staff and Organizational Development (NISOD) and the higher education magazine Diverse.

Jordan was born in Alabama but has called many places home. “I was an air force brat, so growing up we moved frequently.” She moved to Highlands County when her father retired from military service and plans to stay put.

“I am going to devote my time to home renovations, a bit of travel, and lots of time with family and friends,” she said.
Kovacs said she’s waiting see how the business office will soldier on without Jordan.

“Dean was definitely the go-to person in our office,” Kovacs said. “I think this will be a case of not knowing how much you miss someone until they’re gone a month.”

Jordon got a laugh out of her elevation to honorary dean in the waning hours of her time on campus.

“I’ve always told folks I am the only real dean around here,” she said with a chuckle. “I can say that because it’s my name.”