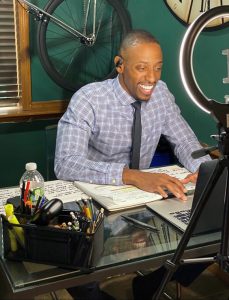 AVON PARK – June 14, 2021 – As young people, we all dream about how our lives will unfold. We may dream of a career that fulfills our ambitions. Sometimes, when our dreams become reality, they take a turn in a direction we would never have expected. A passion may become something new and equally fulfilling. And so it was for Derrick Roper, a South Florida State College (SFSC) alumnus who graduated from the College in December 2006 with an Associate in Arts.

Roper loved to perform. When he was a student at Avon Park High School, he tried out for cheerleading in his sophomore year and made the junior varsity team. His cheerleading coach suggested he take classes at a dance studio in Avon Park, so he signed up. Although he had never taken dance classes before, his instructor, Amy Sims, was impressed with his abilities. Once he graduated from high school, Sims asked him to teach dance at the studio.

“I was teaching hip hop dance,” Roper said. “That was my skill. I had never been trained in any other genres of dance. Miss Amy pushed me into to doing Jazz and things like that. Kids and parents had seen me dancing at the studio for the previous three years, so they all knew me. So, when I started teaching, all of the younger kids wanted to sign up. I had about 25 first graders in my first class. It was a lot of fun. I learned a lot from Miss Amy about how to teach. Under her leadership, I learned how to become a choreographer and dance teacher. And I fell in love with it.”

But Roper’s performance skills branched into acting. While he was a student at SFSC, he was cast as one of the leads in a musical produced by Larry Moore called “Yuletide Treasure” at the Restoration Center in Sebring. Moore was a Sebring resident who owned a production company. “Once I did musical theater, I really fell in love with the life,” Roper said. “I knew that this is what I really wanted to go to college for.”

Roper continued his education at Florida A&M University (FAMU), majored in theater performance, and graduated in the summer of 2009. At FAMU, some of the productions he performed in were August Wilson’s play, “Jitney,” and a children’s production of “The Emperor’s New Clothes.” At the Boys and Girls Club in Tallahassee he taught hip hop dance. He also performed at Tallahassee Little Theater as part of the dance ensemble in “Chicago” and played Papa Ge in Lynn Ahrens’ one-act musical, “Once on This Island.”

“While at FAMU, one of the biggest productions I was in was called FAMU Connection,” Roper said. “It’s the university’s recruitment tool. During football season, college fairs are held at high schools. Wherever the football team is playing, they hold a college fair. The FAMU Connection travels with the team and goes to the high schools. It’s a 25-minute show—live singing and dancing. That was one of the biggest things that I enjoyed about FAMU.” 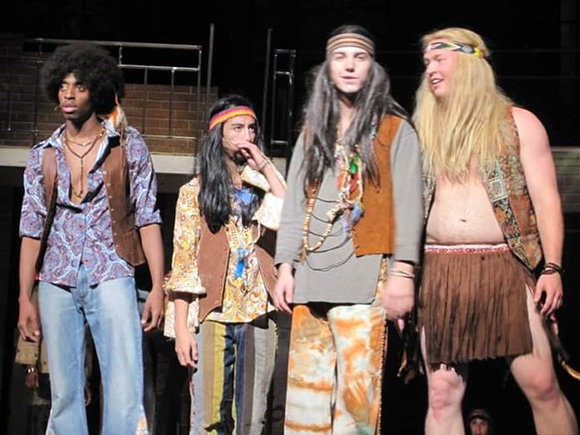 At SCAD, Roper (left) played Hud in the musical, “Hair.”

During his last semester at FAMU, Roper’s professor said, “You should go to Disney in Orlando and audition. So, once you graduate, they’ve already seen your face and you can get yourself out there and maybe have a future opportunity.”

Roper drove to Orlando and auditioned for “High School Musical II, the Live Show.” “I was just going in for an audition for the experience and to see how I do in that environment,” he said. “I auditioned and got a call back. During the call back, they were making cuts left and right. It went from 50 of us down to four. I was one of the four, so I was like, ‘This is real.’ Then they asked questions such as, ‘Are you willing to relocate if you’re offered a contract?’”

Disney called back and offered Roper a full-time contract for a principal role. “But I was still in school,” he said. “I didn’t think my professors would want me to take a semester off. I was about to graduate.”

Roper approached his professor and told him about the contract offer. His professor said, “It’s your last semester, so you can use your experience to write a thesis paper.”

Roper wrote his thesis on performing in an equity show. By working in the Disney production, he received his Equity card for the union, Actors’ Equity Association. “You need your Equity card when you go to New York and audition for Equity-only productions,” Roper said. “I wrote my thesis on my nine-month contract with Disney and six outdoor shows a day in the blazing heat, from January through September. It sounds grueling, but it truly was a learning experience. It was so much fun.”

Eventually, a Master of Fine Arts (MFA) was in Roper’s future and he was accepted into the Savannah College of Art and Design (SCAD). He was awarded his MFA from SCAD in 2012. “At SCAD, I had a lead role in a musical called, ‘Zombie Prom,’ and we performed the musical, ‘Hair.’ I was part of the ensemble, and my character’s name was Hud.”

“After SCAD, I wanted to move to New York,” Roper said. “When I was in high school, when I was at FAMU, even at SCAD, roles were coming to me left and right. I thought that when I got to New York, I would audition for Equity shows. After I moved to New York, I started auditioning. I mean audition, audition, audition. And you hear a million ‘No’s.’ When you’re hearing, ‘No, no, no,’ it makes you rethink your talent. I would get a call back but not make it any further. But, I still had to work. So, I applied for a job teaching hip hop dance at Harlem Children’s Zone in New York. I could still audition for theater roles because I was teaching after school hours for them. But the more I taught, the more I grew professionally in my job. Then, I auditioned less. At my job, I was promoted from dance instructor to the middle school program coordinator at the Harlem Children’s Zone.

“I had staff working under me. I was in leadership. From there, I got another promotion to assistant director for middle school and high school. By this time, I had stopped auditioning altogether. I had been teaching kids for so long and liked teaching kids that it became second nature.” 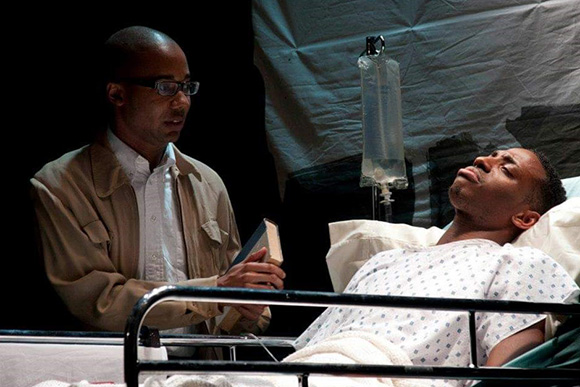 Eventually, Roper was offered a teaching position with Achievement First, a charter school in New York. He applied and interviewed just before the pandemic hit. “I had never taught in a classroom. But that’s what I’m doing currently. It’s my first year as a full-time theater teacher.”

During the pandemic, Roper’s classes were taught by remote. “There are a lot of theater resources online and books to teach theater online,” he said. “And a lot of at-home exercises that you can do. The students love to do partner scenes, so I found different scripts for them. I taught them about characterization, vocal expression, and how to use different movements. Because they were limited in in-person interaction, we had to rely on our voices. We made sure we were connecting our voices to our characters and paying attention to enunciation. We’ve done things like that in the virtual space.”

Roper said that the most satisfying thing about his career has been his transition to teaching the arts. “There’s no better thing for me than to be on the stage,” he said. “But to teach it and give feedback to little ones, I’m certain that I’m giving them knowledge and confidence that they’ll be able to use for the rest of their lives. Just to know that they have to deal with the injustice in the world with being a little black or brown kid — to make sure that they have support, that they have someone to go to, that Mr. Roper is always there. If I see something in them, I’m going to try to bring that passion out of them. I love working with kids and watching them blossom and help them rise to their full potential.”

Roper followed his dreams and found a new passion. As someone who’s been there, he has a message for young people: “Find your passion and make sure that it’s something that you love to do. No matter the obstacle or no matter what anyone says, go after that passion and do it and live life to the fullest with no regrets. No matter where you’re from, no matter how small the town is, you can dream big and see what you need to do to follow your dream. Don’t let where you’re from or your surroundings stop you.”