Alumnus James Rogers Jr. Speaks About His Commitment to Nursing Care in a Hospice Setting 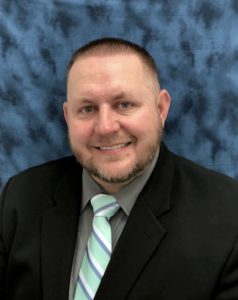 AVON PARK, Fla. – Oct. 17, 2019 – James Rogers Jr., an alumnus of South Florida State College’s (SFSC) Associate Degree in Nursing (ADN) program, became area executive director at Cornerstone Hospice in Lake and Sumter counties in April 2019. Previously, he was the director of admission for the seven-county Central Florida region that Cornerstone serves. He spoke about his desire to begin a career in nursing and the importance of care in a hospice setting.

SFSC: Where are you from?

JR: I was born in Clarion, Penn. Our family moved to Sebring in 1981 and then relocated to Polk County in 2002.

SFSC: Why did you go into nursing?

JR: I worked with my dad as a mechanic while growing up and through high school. He always encouraged me to choose a field where the work was not as hard on my body as auto mechanics. I enjoyed being around people and helping them in any way I could.

SFSC: Did someone in particular inspire you to go into nursing?

JR: My wife’s stepmother, Joanne Foote, planted the seed in 1998 that I should explore nursing. She was a nurse as well, and I took her advice.

SFSC: Foote was a professor in SFSC’s Nursing Education Department for nearly 13 years and retired from the College in January 2018.

SFSC: How did you begin your nursing career?

JR: In 1998, I took a Certified Nursing Assistant (CNA) class at Lake Placid Health and Rehabilitation Center in Lake Placid, Fla. I started out working as a CNA in a long-term care facility. Once I completed my Practical Nursing (PN) certificate to become a licensed practical nurse (LPN), I worked in a hospital setting, doctor’s office, home health agency, home respiratory, and then landed in hospice.

SFSC: What nursing degrees have you attained?

JR: I earned my PN certificate from SFSC in 2001 and my ADN from SFSC in 2011. In the future, I plan to complete a Bachelor of Science in Nursing (BSN) through SFSC.

SFSC: What is hospice and why is it important?

SFSC: How and why did you get into hospice care?

JR: I wanted to get back to the original reason nursing won me over and to feel like I was making more of an impact on the patients and families that I cared for. As I was nearing the end of nursing school, I considered changing to a different area. I had worked in hospice for five years prior to getting my ADN. While I was doing my practicum on the ambulatory surgical floor, I quickly fell in love with the high-paced flow of the unit. However, that plan changed when my dad became ill, was admitted to hospice care, and passed away. It was that moment that re-motivated me to stay in hospice and challenge myself to make a difference in my community.

SFSC: Was it difficult transitioning from nursing into administration?

JR: Transitioning into leadership was one of the most difficult transitions for me. Having a strong group of mentors who were willing to support me made the transition smoother. I am a “fixer” and had to learn to empower my team, rather than enabling them. In my current role, I can do that.

In my current position, I am responsible for the day-to-day operations of the region. Those responsibilities include, but are not limited to, maintaining positive patient satisfaction scores, growth of the regional census, the satisfaction of my internal clients (employees), and the financial performance of my teams. We are firm believers that if our staff and patients are happy, that word of mouth will spread, ultimately increasing our census and allowing our financials to fall in line.

SFSC: What nursing professors at SFSC inspired you and why?

JR: Dr. Maryann Fritz, retired director of nursing at SFSC: In 1999, when I was considering the nursing program at SFSC, I spoke to her multiple times and she was always encouraging. I had her for my Nutrition class and then as a professor in the program. She ran a strict program and, to this day, I live by many of the values she instilled in me. Being honest, on time (early), and if corrective action was needed, once it was completed there was no further discussion about it.

Helen Shoemaker, professor of nursing at SFSC: Mrs. Shoemaker took on a “mother-like” role in my life.  Not only did she want me to succeed as a nurse, but she also cared in a way that only a parent could.  She went above and beyond to help me personally with the struggles that came my way while in the program and even after.

Dr. Michelle Heston, dean of health sciences at SFSC: She was one of my professors during the PN program. She always demanded the best from us and had high standards that we had to live up to. Many of those still hold true for me to this day. She was always available to assist with any college-related or personal hurdles we were facing.

SFSC: What advice would you give to someone who’s considering nursing in a hospice setting?

JR: I participated in the mock nursing interviews and always recommend working a minimum of one year in Med-Surg (Medical-Surgical) to build that strong foundation of working as a nurse. Following that year, I recommend shadowing a hospice nurse to really understand what that job encompasses. Hospice nursing is hard, but also the most rewarding area of nursing, in my opinion.