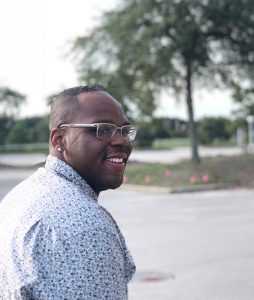 In high school, SFSC alumnus Ricky Sherrill, got the film bug. Now in his senior year at the University of Central Florida (UCF) in Orlando, he’s contemplating his future as a film editor and, possibly, director. He anticipates earning his Bachelor of Arts in Cinema Studies in spring 2019.

“Leading up to graduation in the spring, I’ve been stressing about it,” he said. “I’d like to work with a film company, to edit. Anything to do with editing, whether it’s for commercials or corporate videos. Eventually, I’d like to be a filmmaker and become one of the best. Right now, I’m most comfortable with editing.”

While a junior at Sebring High School, Sherrill took his first theater production class with teacher Jeff Cantwell. “At first, I thought it was going to be an easy A, just like a lot of other students. But I started taking it seriously when I discovered that I was good at editing film, directing, and being in front of the camera.”

Over time, Sherrill’s interest in making and editing films and videos soared and he put his enthusiasm to work. In 12th grade, he wrote a song for Sebring High School called “Blue and White.” A teacher then asked Sherrill to create a video for the school, one that would depict the school’s quality and the student’s school spirit.

Every filmmaker has been influenced by those who’ve gone before them, and Sherrill has a few favorites of his own. “I like all types of movies,” he said. “If I were to choose a favorite film director, I would say Quentin Tarantino. Recently, I watched ‘BlacKkKlansman’ by Spike Lee, which I really liked. I watched it by myself and absorbed it. But my favorite movie is ‘The Pursuit of Happyness’ with Will Smith. It had an impact on my life.”

“The Pursuit of Happyness” is about a single, homeless father who struggles to create a better life for himself and his son. Sherrill said that he lives by a quote from the film: “You got a dream. You gotta protect it. People can’t do somethin’ themselves, they wanna tell you you can’t do it. If you want somethin’, go get it.”

“In my own life, as much as I might want to quit, I just keep moving forward,” he said. “I try to see the bright side of things when things aren’t going my way. I was impressed by how determined the Will Smith character was in his life and how he lived. He was sleeping in bathrooms.”

“The quote from ‘The Pursuit of Happyness’ fits into my life right now,” Sherrill said. “When I graduated from SFSC in May 2016, I knew I wanted to go off to get my bachelor’s degree somewhere. My mom asked me how I was going to pay for it and where was I going to live. She wasn’t trying to discourage me; she was, simply, being practical. I honestly had no idea how I would pay for things. I knew at the end of the day that I wanted to go away to college. I didn’t let anything stop me from pursuing that dream.”

But Sherrill worked through the challenges. His mother helped him find a place to live in Orlando, and a first generation scholarship to UCF covered tuition in his junior year. In Sebring, Sherrill had worked at Publix and continued to do so while in Orlando. “During the spring and fall, I work 20-25 hours a week. During the summer, it’s 30-35 hours a week. I receive financial aid to pay for tuition, but I have to pay for rent as well. Every wall between me and going to college, I knocked it down. Don’t ever let anyone tell you that you can’t do something.” 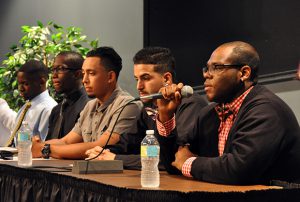 Sherrill has been able to share his experiences in life and college. At the urging of SFSC student advisor Rob Hampton, Sherrill served as a panel member for SFSC’s Minority Male Initiative for three years. Every spring, SFSC invites nearly 100 minority male students from high schools in Highlands, Hardee, and DeSoto counties to its Highlands Campus. The intention of the half-day conference is to motivate young men to enroll in college credit and occupational certificate programs after completing high school and know that they will find a supportive and nurturing college experience that will prepare them for the future.

“I’ve been in their shoes,” Sherrill said. “This past year, I felt like the students were interested to know why they should keep going. After I made a brief presentation, I found that one student in the audience was on the same path that I was on. He was interested in pursuing an education in film. He wanted to know how to pay for it, what classes I was taking.

“Being on the panel motivated me even more in continuing my education because I was picked to do something like that. I encouraged others and that inspired me to work even harder in pursuing my education. In other words, I have the power to have a voice in this, I get to hear others’ stories, so it motivated me.”

“Ricky has been a part of the Minority Male Initiative since its launch in 2016,” Hampton said. “He has never hesitated to volunteer his time and life experiences, in hopes of inspiring young men in our community.”

Although Sherrill has several months to go before earning his bachelor’s degree, his future is at the forefront of his mind. “At first, I considered going to Los Angeles for work. But what changed my mind was the fact that a speaker who came to my film class stated there are other opportunities elsewhere. So, my goal is to work for Publix Corporate in Lakeland, then possibly go into the filmmaking world later on in life.”

Sherrill offers advice to people contemplating college: “If you don’t put the action in it, if you don’t believe in yourself, you won’t accomplish your dream. If you don’t know how, how can you expect someone else to believe in you? I want everyone to succeed. If you’ve got something you want to do, the road may not be easy, but there’s a light at the end of the tunnel. You’ve got to go through the darkness to get to the light.”