Archaeologist to Talk about Native Floridians

AVON PARK, Fla. – April 12, 2017 – The Native Americans who once thrived along the Crystal River will be the topic of the next Kissimmee Valley Archaeological and Historical Conservancy (KVAHC ) lecture at South Florida State College. 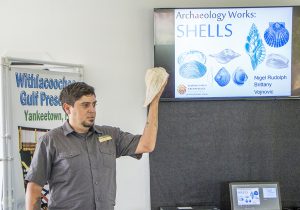 Nigel Rudolph, an archaeologist with Florida Public Archaeology Network (FPAN), will speak April 20, 7 p.m., in Building G, Room 101, on SFSC’s Highlands Campus in Avon Park. The public is invited at no cost.

Rudolph’s presentation is titled “Crystal River: Culture and History.” The Crystal River was once home to Native Americans and served as a sprawling ceremonial center, attracting people from great distances.

Along the river’s banks lies a complex of burial and temple mounds. They are some of the longest continually occupied ceremonial sites in Florida. Though the Native Americans who lived there are now long gone, their impressive earthen architecture remains. The mounds attracted early archaeologists who discovered decorated pottery, shells, and copper artifacts.

“These remarkable earthen structures and artifacts earned the Crystal River site a place among the most famous archaeological sites in Florida,” said KVAHC’s Anne Reynolds, who organized the lecture. “Although the site is well-known, there is still much to learn about the people who once thrived on the bountiful Crystal River.”

Rudolph is the archaeology coordinator at the Central Regional Center of FPAN in Crystal River. He completed his undergraduate work in cultural anthropology at the University of West Florida and a Bachelor of Fine Arts with a specialty in ceramics from the University of Florida. Rudolph worked as a full-time field archaeologist for more than a decade before joining the FPAN in 2013.

The talk is one of a series at SFSC sponsored by the KVAHC. For more information, call Anne Reynolds at 863-840-3995.