AVON PARK, Fla.–Oct. 5, 2015–Some see them as a threat to privacy and public safety. Others see them as useful but remain wary.

But for John Byrd, professor of electronics at South Florida State College, and his student, Leo Mourao, they make classroom learning exciting and enjoyable.

Unmanned aerial vehicles, UAVs for short, were the topic of the day at SFSC’s Highlands Campus recently, not only for the professor and his student, but also for 20 law enforcement officers, hobbyists, and the curious who had gathered for a daylong seminar on the good, the bad, and the ugly of UAVs. 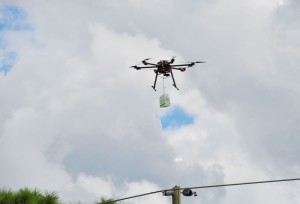 “We see UAVs as an amazing learning tool,” said Byrd, as he stood with Mourao at a campus parking lot on the edge of field bracketed by light poles and palm trees.

“About a dozen students in my electronics class built a UAV this year and they had to learn algebra, basic engineering, software, and, of course, electronics to get it flightworthy, said Byrd.”

That student-built UAV sat on the asphalt as Mourao, a second year student from Sebring, held a control module secured by a lanyard draped around his neck.

After asking the onlookers who were taking a break from the workshop to stand clear, Mourao sent a signal that had the six rotors on the lawn mower-sized UAV buzzing. Within seconds, Mourao maneuvered the UAV 50 feet in air, zigging and zagging between poles and trees.

To show off its power, Byrd attached a nearly seven-pound payload, a six pack of water bottles that dangled from the underbelly of the UAV. Mourao sent it aloft and through an aerial course across the field without any effect from the extra weight.

“This UAV could carry up to 30 pounds but that would greatly limit its flight time,” Byrd explained. “We call them UAVs because they perform a function, unlike drones which really are just targets.”

The UAV’s agility and capacity to carry a payload, including a camera, underscored much of the discussion during the workshop.

“UAVs can save lives, both civilian and law enforcement,” said Joe Marble, a sergeant with the Hardee County Sheriff’s office, who took much of the morning to discuss what he said were the “pros and cons” of UAVs.

“But in the hands of bad guys, a lot of folks could get hurt with a UAV,” Marble said.

Marble, who is self-describe UAV enthusiast, owns a device about two feet in diameter, equipped with a video camera that sends real-time video to a handheld console, and can fly one mile from the operator.

“There are legitimate concerns about privacy when you have folks flying a video camera above backyards,” Marble said. “But they are here to stay, and we need to adapt.”

Marble said a recent standoff between Hardee sheriff deputies and an armed suspect convinced the sheriff to acquire a small UAV that will allow for a live aerial video feed of incidents, rather than putting a deputy in harm’s way. He said his department is now testing the UAV and plans to place it in service soon.

Highlands County does not have UAVs, according to Robert Jordan, director of the information services division of the Highlands Sheriff’s Office.

Byrd, who worked as an engineer before taking up teaching electronics at SFSC, said his classroom-built UAV cost about $3,000 to construct. 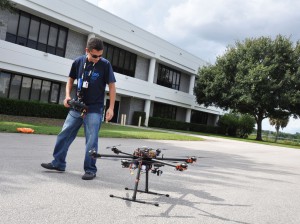 “We purchased parts from several suppliers and had to fashion much of it ourselves,” Byrd said. “This hands-on work really engaged the students and prodded them into learning much more than just the electronics we usually teach.”

He said students who were typically adverse to algebra eagerly computed weight loads to ensure they chose the right motors.

Byrd said the craft is not limited to its current configuration. He hopes to get funding to upgrade the motors and batteries that would allow for longer flights with heavier payloads.

While SFSC students built their UAV, the public can purchase a ready-built craft with a video camera and hand-held controller for around $2,000.

When operated by inexperienced users, these UAVs can fly in the path of jetliner approaching an airport for a landing with disastrous consequences, Marble noted.

“At some point the FAA is going to have to intervene to ensure that all commercially available UAVs are designed to steer clear of airports and other sensitive sites,” Marble said.

But a home built UAV remains a constant danger. A prospect that loomed over much of the workshop’s discussion.

Marble played a video showing a small UAV equipped with a paint gun darting about striking accurately at several silhouettes that had been set up as targets in a large field.

“Here is the nightmare scenario,” Marble said, pointing to the silhouettes splattered with red paint.

The bad angle to UAVs doesn’t dampen Mourao’s enthusiasm. Donning a pair dark sunglass to shield his vision as he guided the UAV above the power lines, Mourao extolled the potential of UAVs.

“With the right motors and equipment, you could get a small UAV to fly to Orlando and back,” he said.