Audrey May Speaks of Success During SFSC Commencement

AVON PARK, Fla.–April 27, 2016–Audrey May, who is set to graduate from South Florida State College on May 5, doesn’t like statistics. More to the point, mathematics was her weakest subject.

But May knows enough about probability to realize hers was a longshot chance at picking up her Associate in Arts degree at SFSC’s spring 4:45 p.m. Commencement ceremony.

But not only will May mount the stage at SFSC’s afternoon ceremony for arts and sciences graduates to get her diploma, she will also take to the lectern to deliver the student commencement address. 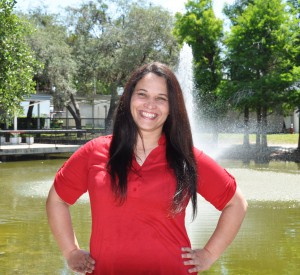 Audrey May on SFSC’s campus after a day of classes.

May’s journey to selection as the speaker starts in Philadelphia, moves to Okeechobee, takes a harrowing detour to Central America, before ending in Sebring, with stops in Miami and Houston along the way.

“I beat the odds to get to SFSC and finish up my associate degree,” May said, while on SFSC’s Highlands Campus after a day of classes. “Statistically speaking, people who started out where I started out don’t end up where I am at now.”

May was born in Philadelphia. Her parents had moved to the mainland from Puerto Rico in search of better jobs. But when she was 3 years old, her parents moved their six children to Okeechobee, Fl.

“We were a family of extremely modest means with my parents raising six children in a small house,” May said.

As the youngest child, May was at the bottom of the pecking order, and worse she said, the object of abuse from an older sibling. In a fit of desperation and seeking safety, at age 13 she ran away from home. In search of a haven, May slept in the dugout at the local baseball field. She helped herself to outfits drying on clotheslines to maintain an appearance of normality.

“As bad as things were, I kept going to school,” May recounted, with tears welling up. “The other kids would make fun of me because of the way I dressed.”

Rescue from her miserable straits came in the form of a man. May met an agricultural worker who offered her a measure of hope she could find love and safety.

The two moved to California to live with his family and had a child. Though life was often hand to mouth for the young couple, their child gave May a sense she had made the right move.

May went with the child’s father to his ancestral village in El Salvador to visit his family and settle some business affecting his immigration status.

“It was all a trick,” said May. “After three months, I said we had to go back for the baby’s sake, but he ripped up my and the baby’s passports.”

May found herself trapped in the hinterland of El Salvador. Now the object of her husband’s every whim. Her family grew.

“I became a campesina,” May explained, using the Spanish word for a rural peasant. “I joined the village women beating clothes on rocks in the river. The same river from which we drew our water. The same river that collected the sewage.”

With her children’s bellies bloated from chronic intestinal infections brought on by the river’s water, May was ecstatic when a band of Mormon missionaries swept into the village with medicine.

“As the missionaries were talking among themselves about how to treat the children, they noticed I understood what they were saying to each other,” May said. “They were blown away to discover that I was an American.”

After hearing of May’s travails, they hatched a plot to bring her home. They agreed to meet by the river the next day, pretending they were reading the Bible so that they could plan May’s escape without raising any suspicions among her husband’s family.

The missionaries got May to the American embassy, where she was met with a frosty reception. Without any documentation from May, they weren’t convinced she was an American.

“Not knowing what to do, I started reciting the pledge of allegiance and singing the Star Spangled Banner,” May said with her first sign of glee recounting her days of captivity. “That worked like magic.”

The embassy arranged for May and her four children to exit El Salvador and resettle in Miami, where she had to readjust to life in a county she had not seen in nearly 10 years.

“Wow, it was both wonderful and crazy to be back home,” May said. “From Miami I went to Houston, where family lived.”

May’s family in Houston could not cope with the young children. Her only option was a shelter. She took it.

The shelter proved a boon for May. The staff arranged for childcare, helped May land a part-time job bagging groceries, and got her enrolled in high school classes.

“My life was work, school, off to the childcare, then back to the shelter, May said. “But it was a stable environment and, after finishing high school, they helped me enroll in the local community college and graduate from a study medical assisting program.”

After working full-time at a hospital, May saved enough money to move to Highlands County, a community she said she knew was a great place to raise a family.

“My first priority was to get a job,” May said. “I got hired on at Florida Hospital in their lab because of my hospital experience in Texas.” She found an apartment, and she started taking classes at SFSC.

May had set her sights on starting the nursing program at SFSC. She knew she had to make her way through a bevy of science and general education courses with good grades to gain a spot in the program.

May experienced ups and downs. “I really enjoyed the science classes and the engagement with the faculty, who really cared if their students succeeded,” she said. “But I had one problem: math.”

“I kept getting closer each time but I just couldn’t break through the point where I would pass,” May said. “So, I went back to McBride and my guidance counselor, Kim Hemler, for a solution.”

McBride said he recommended May take the course as independent study class so that she could work at her own pace. “She kept coming back and back—she was bent on passing that course,” McBride said of May’s determination to earn the credits for mathematics. “I typically don’t recommend independent study but May worked with me one-on-one over many sessions and in the end she passed the course.”

While May was working her way through SFSC’s Associate in Arts degree program, she continued at her lab job at Florida Hospital and caring for her children at an apartment in Avon Park. “There was this guy who worked in the emergency room who was keeping tabs on me,” May said. “I thought he was spooky because he kept showering me with attention.”

After six months avoiding him, May agreed to go out on a date. “I thought this guy is going to run once he finds out I am single mom with a whole brood of kids,” May said. “During our dinner date, I laid it out for him. He said ‘that’s OK’ and I am like stunned.”

Brandon May, whose mother, Eileen May, heads up the Lake Placid Chamber of Commerce, married Audrey in a ceremony she never dreamed would happen. Pulling up a Facebook picture of herself at the altar, May said, “This is something I thought was just not possible. Brandon was a gift from God.” May has forged a close bond with her father in law, Buddy, finally finding a father figure.

They soon added children to the ‘brood.” Working, married, and a mother to a growing family, May kept plugging away at earning the credits toward her associate degree at SFSC. “After a few years of working with my amazing supervisor and the lab director at Florida Hospital, they helped me decide to move away from nursing toward biomedical sciences,” May said. With college algebra out of the way, May picked up the pace, taking more classes in order to clinch her associate degree this spring.

“My focus at SFSC centered on my two-year degree so that I could enter Adventist Health Sciences University biomedical sciences bachelor’s degree program this fall,” May said. A degree in biomedical sciences will build on May’s work experience in the lab, giving her an opportunity to increase her earnings working in a hospital-based lab.

“Without the extra help from the dedicated instructors like Mr. McBride, the tutors like Enrique Ramos in SFSC’s Learning Resources Center, and all the support I got from Kim Hemler in the Advising and Counseling Center, I likely would never have kept at it,” May said, as she pondered what might have been.

With that thought in mind, May nominated herself as Commencement speaker. She said she had a story to tell, one that touched both on her personal triumph and the part SFSC played in her success. But there’s a third reason May has for using her life’s story as the basis for the commencement address.

“Yes, I want the audience to hear that statistically speaking I should have been a woman who never would have made it this far,” May said. “But my most important audience will be my children on that night.”

“I want my kids to know I dedicate my degree to them,” May said. “If Mom can get her education after all that she has been through, then they can do it too.”

SFSC’s will hold two Commencement ceremonies this spring. An afternoon ceremony for art and sciences graduates at 4:45 p.m. and a 7:45 p.m. ceremony for applied sciences and technologies, health sciences, and high school diploma graduates. Both ceremonies will take place in the Wildstein Center for the Performing Arts on SFSC’s Highlands Campus, 600 W. College Dr., Avon Park.