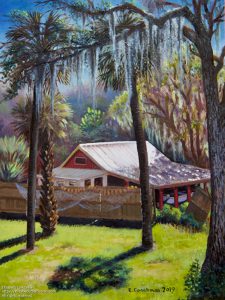 AVON PARK, Fla. – Jan. 10, 2022 – The Museum of Florida Art and Culture (MOFAC) on South Florida State College’s (SFSC) Highlands Campus in Avon Park presents “Mindscapes,” now through March 25. The exhibit features the intaglios and drawings of award-winning artist Elizabeth Grange Okulski Coachman, M.D. An Artist Reception and Talk will be held on Wednesday, Jan. 19 at 12:30 p.m. in the Museum.

Coachman grew up near Chicago in a family of punsters and art appreciators. After initially studying advertising design at Philadelphia’s Moore College of Art, she transferred to Rutgers University’s Biology Department in Camden, N.J. with aspirations toward medical illustration work. Somehow, she morphed into a pre-med major but continued drawing and painting.

Coachman married young and the U.S. Navy sent her first husband to serve in semitropical Okinawa, Japan where she was a civilian medical lab assistant and a freelance artist. Her exotic experiences while creating paintings for an outlandish American nightclub entertainer were memorable. Coachman’s travel left an indelible impression on her.

Back in the United States, Coachman acquired an M.D. at Philadelphia’s Temple University School of Medicine. In her spare time, she drew humorous illustrations for the school’s yearbook and advertising posters for her medical class. Retiring after 20 years in hospital pathology practice, she studied drawing, painting, and printmaking at the Fine Art Center in Dunedin, Fla. There she won several awards including a best of show for print work. 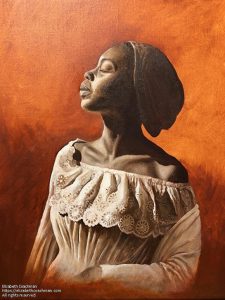 Much of Coachman’s visual pun intaglio work was in her first solo exhibit of 88 works, held in Tarpon Springs, Fla., and called, “Fun and Other Words.” She is a charter member of and has exhibited with the Floridian printmaking group, 24 Hands.

The solo exhibit at MOFAC on the Highlands Campus of SFSC includes intaglios and intricate graphite drawings. Intaglios are a general term for metal-plate printmaking techniques, including etching, dry point, engraving, aquatint, and mezzotint. The word comes from the Italian intagliare, meaning “to incise” or “to carve.” In intaglio printing, the lines or areas that hold the ink are incised below the surface of the plate, and printing relies on the pressure of a press to force damp paper into these incised lines or areas, to pick up ink.