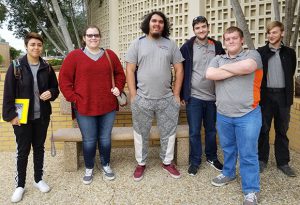 Five members of South Florida State College’s (SFSC) Brain Bowl team will participate in the prestigious National Academic Quiz Tournaments Community College Championship Tournament (NAQT CCCT) which will be held March 2-3 in Rosemont, Ill. All two-year, junior, and community colleges from across the United States are eligible to compete in the NAQT CCCT event; however, only five members of a team may participate.

The SFSC Brain Bowl team goes into the tournament with an 18th place ranking out of 24 teams. The five team members are Rubi Barajas from Arcadia, Carolina Bowden from Arcadia, Mathew Daniel from Arcadia, Juan Perez from Arcadia, and Josh Gurll from Sebring. Their coaches are Lena Phelps, David Zorb, and Dr. Brian Deery.

“SFSC’s players love the idea of competing for a national title and going head to head with the best at the two-year level,” said Phelps, chair of library services at SFSC.

According to Phelps, NAQT provides the competitors with a list of topics that officials will cover at the tournament in Chicago. “The questions asked are supposed to complement what the students are learning in their classes,” she said.

To prepare for the national tournament, the students practice at the SFSC DeSoto Campus in Arcadia on Tuesdays and Thursdays and at the Highlands Campus in Avon Park on Mondays and Wednesdays. On the way to state tournaments, they make use of the time by quizzing each other.