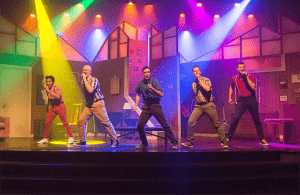 AVON PARK, Fla. – Dec. 11, 2018 – “Forever Young” is an exciting musical production that takes a new look at the greatest hits of all time and it’s coming to the Alan Jay Wildstein Center for the Performing Arts at SFSC. Scheduled for one performance on Sunday, Jan. 13 at 3 p.m., the show is packed full of pop, rock and country classics. This Branson hit show takes audience members back to their youth … and their record players.

“Every one of these songs will bring back a memory,” said Cindy Garren, director of cultural programs at SFSC. “It’s a feel good show for families and anyone who grew up in the ‘70s, ‘80s or ‘90s.”

Winner of the Best New Show Award in Branson, “Forever Young” is scheduled for only six performances in Florida. Set in a basement retreat in the Midwest, five men relive the music of their lives with loads of laughs and songs in a sentimental journey of a lifetime.

Created by Justin Sussanella, who hails from Indiana, the show tells the story of five classmates who split up after graduation but come back together years later after taking in some hard knocks from life. “The show has this wonderful ability to connect the men through music,” added Garren. “It’s funny yet poignant. Wives should definitely drag their husbands to this show!”

Upon graduating from high school, Sussanella was drafted by the New York Mets baseball team where he spent time in the minor leagues. He gave up baseball to pursue a career in music, spending 12 years performing in many popular Branson productions. “Forever Young” is directed by Josh Sussanella who performed on Broadway in “Spider Man: Turn Off the Dark” and “Rock of Ages.” Branson audiences have been raving about this show since it opened in 2015. This is the first Florida tour for the production.

The Florida Hospital Trending Now Series at SFSC features contemporary performances geared toward the whole family. Upcoming performances are Wild World of Animals on Feb. 16, Rhythm of the Night with a cast of 20 of the world’s most skilled Irish dancers on Feb. 24 and Cirque Zuma Zuma, the ultimate African circus, on March 3.

The performances are sponsored by All Around Septic and Sewer and the SFSC Foundation. Tickets are $30, $27 and $25. Children/student tickets are $10 and children under 3 are admitted free. Groups of 12 or more save 25 percent and the group organizer gets a free ticket to the show. Tickets are available online at SFSCarts.org or by calling the SFSC Box Office at 863-784-7178. The Alan Jay Wildstein Center for the Performing Arts is located on the South Florida State College Campus at 600 West College Drive in Avon Park.