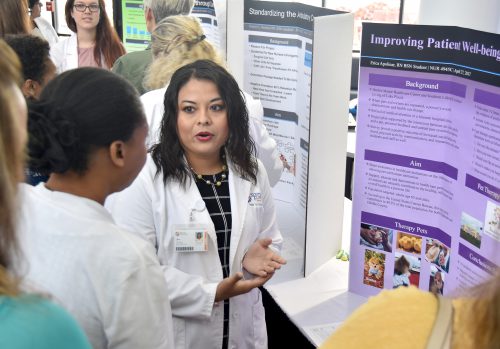 AVON PARK, Fla. – April 28, 2017  – Before graduating from South Florida State College’s Bachelor of Science Degree in Nursing (BSN) program, seniors complete capstone projects that demonstrate their ability to apply the knowledge they have acquired to real-life situations. On April 27, 13 BSN candidates presented their capstone projects to other nursing professionals during the Conference on Caring at the SFSC University Center. In each project, students identified a health-related need, explained the actions they took to address it, and documented the results.

BSN candidate Erica Apolinar, a self-professed animal lover, focused her capstone project on improving patient well-being through pet therapy  by observing how 19 elderly patients responded when she brought her Pomeranian dog Simba to Wauchula’s Hardee Manor Health Care Center. Patients who were withdrawn and uncommunicative became more relaxed when they interacted with Simba. “Sometimes, they talked to Simba when they wouldn’t talk to me,” Apolinar said. Though her project has ended, she and Simba continue to visit with patients.

Nicholson-Kirlew’s research found that while 4.9 million African Americans have the disease, many in Highlands County were not being diagnosed until they ended up in emergency rooms. They were also largely unaware that they could receive education and care through the Highlands County Health Department and other support groups. She advocated for bringing education to this community by forming partnerships with health care professionals and churches.

Other capstone project topics ranged from establishing the value of a 24-hour pharmacy, recognizing the health issues that are caused by poor hydration in older adults, improving health care through local projects and policy initiatives, and educating parents about preventing obesity in their children.

SFSC’s BSN Class of 2017 will graduate at spring Commencement on Thursday, May 4, in the Alan Jay Wildstein Center for the Performing Arts, Highlands Campus.