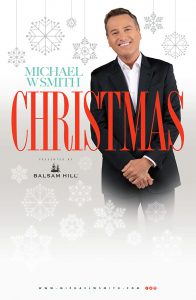 “This is my absolute favorite time of the year and I am so happy to be back on the road,” Smith said. This performance is presented by Balsam Hill, a Christmas décor company.

Tickets for this special holiday concert are $75, $60, $50, and $44. The SFSC concert is sponsored by Gayle Obermayr, DDS, MS. The Wildstein Center is located at 600 West College Drive in Avon Park. Tickets are available online at sfscarts.org or by calling the SFSC Box Office at 863-784-7178.

Smith has been releasing new music regularly and performing around the world to sold-out crowds for the over 35 years. During his storied career, he’s written and recorded over 36 No. 1 songs. He has been honored with three Grammy® Awards, 45 Dove Awards, and one American Music Award. Smith was inducted into the Gospel Music Hall of Fame and has sold over 15 million albums. Amassing an in-depth catalog of achievements, a myriad of legendary performers recently honored him with a star-studded tribute concert in Nashville, Tenn. to celebrate his 35 No. 1 hits.

His most recent album, “Still Vol. 1,” is an atmospheric listening experience of improvisational music coupled with inspirational scriptures. More than just an outstanding songwriter and performer, Smith has given back to the global community throughout his career. Smith has raised funds to battle AIDS in Africa; started Rocketown, a safe haven for young people in Tennessee to meet and find hope; and has helped over 70,000 children through Compassion International. He has also written several bestselling books, including “Old Enough to Know” and “Friends are Friends Forever.”