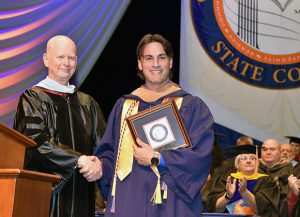 AVON PARK, Fla. – Dec. 15, 2017 – For the SFSC graduates who gathered in the Alan Jay Wildstein Theatre for the Performing Arts on Thursday, Dec. 14, the 2017 Commencement ceremony was a time to celebrate.

Student Commencement speaker Angelo Russo, who received his Bachelor of Applied Science degree in Supervision and Management, congratulated his fellow classmates on persevering through their studies to graduation. He offered advice from lessons learned through his own life and college experience: “If you only focus on your career or the money, you more than likely will not be happy,” he said. “Being a computer nerd, I chased the money during the dot com bubble of the late 1990s. While I was doing that, I lost focus on the rest of my life—family, friends, even my health.”

Russo urged the graduates to learn to be team players. “In the real world, every job, especially today, requires some sort of team interaction, and you will be expected to participate. Your job may be dependent on the team being successful.”

Finally, Russo encouraged the graduates to make time for themselves. “Life can be hectic if you let it. Make sure you find time for yourself amidst the daily grind of work, family, and deadlines. I visit Bok Tower Gardens in Lake Wales on occasion to, literally, stop and smell the roses.”

Later in the evening, Russo was joined on stage when his wife, Coren, also accepted her Bachelor of Applied Science degree in Supervision and Management.

Russo earned an Associate in Science degree in computer information systems from SFSC in fall 2014. Originally from Hollywood, Fla., he began programming computers at age 7. In his senior year in high school, he enlisted in the U.S. Air Force and served as a communications and computer systems operator. Over the years, he developed websites for several businesses and individuals. Currently, he works for the Avon Park Correction Institution in its Information Technology Department. He plans to work toward a master’s degree.

Early in the program, the graduates received congratulations and words of wisdom from Dr. Thomas Leitzel, SFSC president. “My charge to you is to go forth, find your corner of the sky, and do amazing things,” he said.

Speaking on behalf of the SFSC District Board of Trustees, chair Tim Backer, addressed the new graduates: “As you go forward on life’s pathway, you need a clean windshield. You need to keep looking forward and never stop learning. If you have a clean windshield, you will be able to make a good clear choice on your path.”