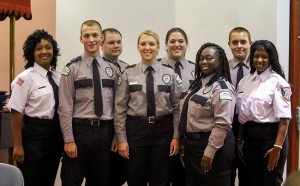 Sheila Brutus earned the top honors for academic excellence, and Cynthia Zwer scored the firearms award for her work on the shooting range.

“These cadets were a group of professionals,” said Austin. “They endured extreme conditions and circumstances to complete this training program. Some were parents, and they all had to commute a great distance to get to classes on time every day. I am confident they could all have promising careers in the criminal justice field if they chose to do so.”

Guest speaker for the ceremony was Michael Braswell, deputy with the Polk County Sheriff’s Department.