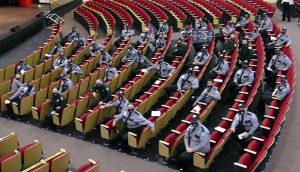 Michael Austin, coordinator of SFSC’s Criminal Justice Academy, called the cadets to the stage and handed each new corrections officer a certificate.

To commemorate Veterans Day and the 245th birthday of the U.S. Marine Corps, guest speaker Major Ryan Thomas of the Hardee Correctional Institution, opened his presentation with a special recognition of those in the audience who served in the armed services. He then offered the graduates words of wisdom: “Everyone leaves behind a legacy, but only a few leave behind a legacy that is worth talking about. A legacy is the story of someone’s life, the things that they did, the places they went, the goals they accomplished, and their failures. Legacies are pathways that guide people in making decisions about what to do and what not to do. Legacies can be positive or negative. Dr. Martin Luther King Jr. left behind his legacy for positivity and selfless service. Whereas, Adolf Hitler left behind his legacy of negativity and destruction. Both are equally important in serving as examples for the future. Leaving behind a legacy is important no matter who you are. I want to challenge each and every one of you today to leave behind the best legacy you can—a positive path for the coming officers to follow. How will you be remembered? What will your legacy or story say about you?”

Upon successful completion of the SFSC 420 contact-hour Basic Correctional Officer Program, students earn a Career Certificate and are eligible to take the state certification examination to become a certified officer. For more information about this program or any other program offered through the SFSC Criminal Justice Academy, call Austin at 863-784-7282 or email Michael.Austin@southflorida.edu.