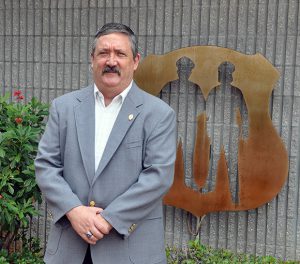 “You have ‘Bridged the Gap between Latinos and Law Enforcement’ and your hard work has not gone unnoticed,” said Greg Gonzalez, NLPOA vice president and awards chair, in a letter to Dr. McLaughlin. “You were selected for your leadership and commitment to serve the mission and goals of the National Latino Peace Officers Association for more than 20 years.”

Dr. McLaughlin has been with SFSC since January 2021. Previously, he honorably retired as lieutenant after serving 26 years with the Miami-Dade Police Department and served as chief of police in Rivesville, W.Va.

McLaughlin first met members of NLPOA while working for the Miami-Dade Police Department. “I worked for five years at the Miami-Dade Police Academy and did the training/coordination for the specialized classes and educational classes,” he said. “NLPOA was having a conference and members of the organization stopped by and indicated that they needed a presentation on racial profiling. So, I did the presentation. Then, they asked me to join the organization. Ever since, I’ve attended most of their conferences on a yearly basis.”

To receive the Legacy Lifetime Member Award, an individual must have been a member for over 20 years. Dr. McLaughlin has been a member of NLPOA for 21 years. He served on the National Board of Directors as parliamentarian for two years and has been the national editor for the organization’s newsletter for past seven years.

The NLPOA was founded in 1972 to eliminate prejudice and discrimination in the criminal justice system, particularly law enforcement; reduce community juvenile delinquency; and lessen citizen tension in predominantly minority communities. It is the largest Latino law enforcement organization in the United States and has chapters nationwide.