Biology Professor Closes Out 30-Year Teaching Career with his Retirement

AVON PARK, Fla. – April 11, 2017 – After 30 years of teaching biology and anatomy and physiology to students at South Florida State College, Dr. Bill Gregory will meet with his final class later this month. 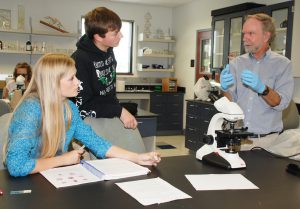 The St. Petersburg native began his teaching career at SFSC in 1987, after a stint working with the Florida Department of Agriculture in Miami.

“I was working in the Miami area researching insects that were damaging the citrus crop,” Dr. Gregory said. “I saw an advertisement for a full-time teaching position at SFSC and decided to apply.”

Dr. Gregory said his interests had begun to move toward a career in teaching while he was in Miami, so the prospect of teaching college-level biology was one he was ready try.

“I came up Avon Park to interview for the job with no real expectations,” he said. “I guess they liked me because I got a job offer and have been here ever since.”

Through the years, Dr. Gregory has taught hundreds of SFSC students introductory biology and anatomy and physiology. His research training, though, qualified him as an entomologist, a scientist who studies insects.

“My area of specialty centers on wasps that parasitize citrus pests,” Dr. Gregory said. “After earning my undergraduate degree in environmental sciences at Washington State University, I returned to Florida to study entomology at the University of Florida.”

Dr. Gregory earned a master’s degree while in Gainesville. He completed his doctoral work in entomology at the University of California, Riverside, in the heart of the state’s citrus region.

Taking on a full teaching load at SFSC left Dr. Gregory no time for research. “I was OK with teaching full time, which kept me just as busy as if I had been publishing and working on grant-funded research,” he said.

In his three decades on the Highlands Campus, Dr. Gregory said he marvels at the change from a small college to a four-year institution. “I remember back when I arrived there were only three buildings taller than one story,” he recalled. He noted a smaller college also lent itself to more intimacy.

“I remember when Building Y was completed and the library moved there from Sachsenmaier Hall. A bunch of the faculty got together and we carried the books over to their new home,” Dr. Gregory said.

Dr. Gregory said his post-retirement calls for him to remain in Sebring, where he shares a home his wife.

“I plan to devote more time to gardening, especially tending to my pineapples,” he said. “I just had my best crop so far with nine pineapples maturing.”

He also plans to visit with his two daughters, both of whom live far afield. One daughter is a registered nurse in Alaska and the other is a geologist researching plate tectonics in the United Kingdom.

“I’m delighted to have worked with so many nice people here at SFSC,” Dr. Gregory said. “I guess you can say I’ve had a good run of it here.”