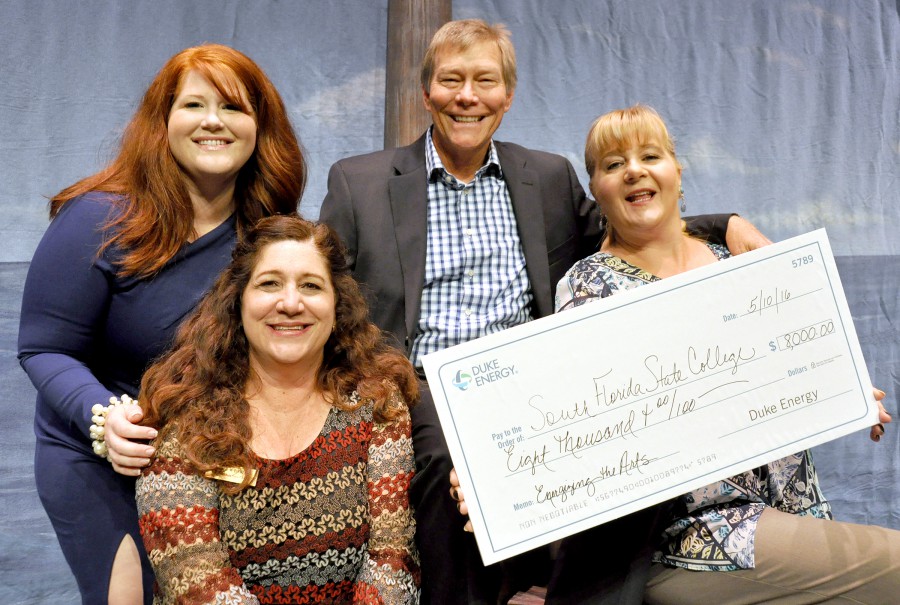 AVON PARK, Fla.–May 10, 2016–For the second year in a row, an “Energizing the Arts” grant from the Duke Energy Foundation has funded an entire season of South Florida State College’s Young People’s Theatre.

On Tuesday, Cindy Garren, director, SFSC Cultural Programs, accepted an $8,000 check from Jerry Miller, the government and community relations manager for South Central Region External Relations of Duke Energy Florida. The donation pays the entire cost of bringing three Young People’s Theatre Shows for Highlands County’s school-aged children to the Alan Jay Wildstein Center for the Performing Arts . The 2015-16 performances were the “The Lightning Thief,” “Henry and Mudge,” and “20,000 Leagues Under the Sea.”

“Arts and culture are one of the areas we support through the Duke Energy Foundation,” Miller said. “We fund programs that allow children to have experiences they might not otherwise have. Although we heavily support sciences, technology, engineering and math programs, we believe an introduction to art and culture is important to the development of a well-rounded student. We recognize that great communities have great culture.”

“The Duke Energy Foundation partners with South Florida State College in bringing professional live theater to schoolchildren,” Garren said. “Young People’s Theater performances are often the first time our local students have the opportunity to see a live performance geared toward children. With its donation, the Duke Energy Foundation brings smiles and joy to the students while launching their appreciation for the performing arts.”

SFSC provides cultural experiences to the community through its Artist, Jazz, Matinee, and Florida Hospital Trending Now series, Young People’s Theatre, the SFSC Museum of Florida Art and Culture (MOFAC), and special performances throughout the year. For more information, visit Performing Arts  or call the SFSC Box Office at 784-7178.