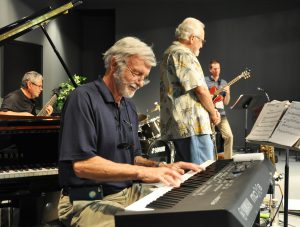 Doug Andrews on the keyboard with Emanon Jazz.

AVON PARK, Fla. – March 31, 2017 – To hear David Naylor say it, music does wonders for those who take time to relish its refreshing effects.

“Music is like a warm bath for the ears,” Naylor, who plays trumpet for the Emanon Jazz band, told South Florida State College students, as he stood on the stage of the SFSC University Center Auditorium on the Highlands Campus in Avon Park.

The five-member band had mounted the auditorium’s stage not for a regular performance. They were on hand to play for two dozen students enrolled in the morning session of SFSC’s music appreciation class. From George Gershwin to Pee Wee Ellis to Pat Metheny, the musicians took the students on a tour of the best of American jazz.

Doug Andrews, who cofounded Emanon Jazz with Naylor six years ago, teaches music appreciation on SFSC’s Highlands Campus. His name will sound familiar to many longtime residents: For years, Andrews headed up SFSC’s Cultural Programs department, booking performing acts and managing its theater productions until his retirement in 2013.

“Today was an opportunity for my music appreciation students to see a top-notch jazz group up close and get to ask them questions,” said Andrews, who returned to teaching last year. “The class text has only one chapter on jazz, so rather than play recordings to supplement the text, the guys agreed to come out to play for the students.”

Andrews, Naylor, and the other band members used the live session to mix in a bit of music history, describe their instruments, and tell how they fell in with love with jazz.

“Now this is the flumpet,” Naylor said, holding up his brass instrument. “It’s not as sharp as this B flat trumpet, but it sounds softer than this flugelhorn over here,” he said, telling the students the flumpet was invented by jazz pioneer Art Farmer, while the flugelhorn served as the inspiration for creation of the saxophone.

Manny Patino, who plays bass, described the versatility of his bass guitar. “With this bass guitar, unlike a standard guitar, I can play cords and bass at the same time,” he told the students. Patino said he picked up the bass guitar when he was 12 years old and hasn’t put it down since.

“Having Manny on stage today was a real treat for the students,” Andrews said. “Here we have an extraordinarily accomplished musician who has toured the world with greats like Arturo Sandoval playing for SFSC students and taking their questions—that’s just great.”

After leading Emanon Jazz in an original composition, “The Last Blues,” Andrews sat at the keyboard, telling the students to watch how the five musicians interacted, sending visual and spoken cues to each other.

“One of the takeaways from today’s lesson is the place improvisation plays in jazz,” Andrews told the students. “Keep an eye trained on how we interact with each other, sending messages back and forth as we adapt to how we’re playing.”

In their next set, playing Ellis’s “The Chicken,” guitarist Martin Rimaldi could be seen pivoting toward Patino and Naylor, with drummer Stan Mulder looking up to watch them exchanging nods.

“Pee Wee is another jazz great and “The Chicken” is a really funky tune,” Naylor told the students, referring to Ellis. “Here’s a bit of trivia: Pee Wee grew up nearby, in Bradenton.”

One of the students asking questions of the band was Jonathan Mondragon, who also serves as secretary of SFSC’s chapter of Phi Theta Kappa, the international honor society for associate and baccalaureate degree-offering colleges.

“We’ve just started learning about jazz in class, so today’s performance really brings the lesson to life,” said Mondragon, who is from Hardee County. “What makes jazz special is that it’s America’s music, a genre that was, so to speak, born in the United States.”

Andrews, whose first instrument as a high school student was the guitar, said he was the musical “black sheep of the family.” He went on: “How did I come to love Jazz?  I can’t answer that because nobody in my family liked jazz, especially my father—I just fell in love with it on my own.”

After the students shuffled off to their next class, Andrews thanked his fellow musicians for coming out and agreeing to stick around for the afternoon session of music appreciation.

“These guys are not only great to play with but they’re so amazingly talented,” Andrews said, “Sometimes I think I’m the weakest link in the chain when we’re on stage,” said Andrews, who has spent his entire career in music, arranging, composing, teaching, playing, and putting on shows.