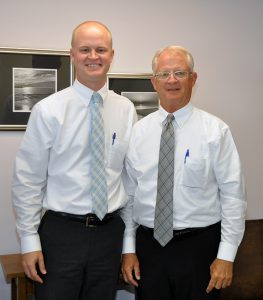 From left: Kyle and Kerry Thompson

AVON PARK, Fla. – July 16, 2018 – “You can never go home again” is a phrase coined by author Thomas Wolfe. Often, the place someone has lived remains but the people and the reality of what it was like disappear over time.

Father and son, Kerry and Kyle Thompson, both South Florida State College (SFSC) alumni, have never lost that sense of home when they speak of Lake Placid or Highlands County and find it a source of great strength.

Kerry is the vice president and office manager of Heartland National Bank’s Lake Placid Office. He received his Associate in Arts degree in business administration in 1977 from SFSC, then known as South Florida Community College, and went on to earn his Bachelor of Arts degree from Liberty University in Lynchburg, Va.

Kyle graduated from SFSC in 2011 with his Associate in Arts degree in business administration and earned his bachelor’s degree in food and resource economics from the University of Florida in 2013. He earned his Juris Doctor (J.D.) and a Master of Laws in Taxation (LL.M.) from the University of Alabama School of Law in 2016. He practices law with Rider & Thompson, P.A., in Lake Placid.

Kerry grew up in Miami. “Miami was a really nice place to live in the late 1950s. We didn’t lock our doors or our cars,” he said. “But my dad was a police officer and could see the landscape changing.”

He was introduced to Highlands County early in life when his family camped at Fisheating Creek in Palmdale and shopped for supplies in Lake Placid. Eventually, the family, discovered that they had a distant relative who owned property in Venus. “He was getting older and wanted to sell some property, so we bought some land and ended up building a house,” Kerry said. “Then, my mom, my brother, and I moved to Lake Placid in 1973 when I was a junior in high school. My dad continued to work as a police officer in Miami and would commute back and forth on the weekends until he retired from the police force.”

Kerry graduated from Lake Placid High School in 1975. Although he didn’t plan to attend college, he went to Edison Community College in Fort Myers on the promise of a golf scholarship, but the scholarship didn’t materialize. He attended the college for two semesters and played on the golf team, but had to work, go to class, and practice golf. Disheartened, he returned to Highlands County and enrolled at SFSC.

While attending college, he worked at Sun ‘n Lake Golf Course in Sebring, getting up at 4 a.m. to mow the greens. He’d then shower and change, head to class at SFSC, then return to the golf course to work until late in the afternoon.

Kerry’s career in banking started in 1978 through an acquaintance, Don Dyer, who had designed and built the golf course at Sun ‘n Lake in Sebring. Kerry worked for Dyer at the Sun ‘n Lake Golf Course in Lake Placid while he was attending Lake Placid High School and then Sun ‘n Lake Golf Course in Sebring after it was opened for business. “Don later went into banking at First Bank in Lake Placid,” Kerry said. Kerry’s mother ran into Dyer at the bank one day. Dyer told her about an opening at the bank and suggested Kerry come talk to him.

Kerry was hired to work in the bank’s loan department. Later, he trained to run the newly opened trust department. He was sent to the University of Florida for a couple of summers and to the Florida Trust School in Gainesville. He worked in trust departments for the next 25 to 30 years, successfully riding the increasing wave of bank mergers and consolidations.

“I chose not to transfer to Vero Beach or Lakeland because Kyle and his siblings were then of high school age, and I thought a move would cause a disruption in their lives,” he said. “Lake Placid was, and is today, a great place to raise a family. The community was such that we were well connected with our local church and the kids were involved in the youth program. My wife Lori and I taught a youth age Sunday school class. So, there was no second thought about moving to Vero Beach or Lakeland.”

“At the time, I was uncertain why I was experiencing so many changes and challenges in my career,” Kerry said. “As I look back on those changes, I can more clearly see the Lord’s hand in each and every event. Although, I must admit, at the time it wasn’t always easy to see that God had a plan. But I was reminded by scripture that I just needed to be obedient to Him.”

At Rider & Thompson, Kyle practices general civil law. “The areas of real estate, estate planning, and probate are really the foundation of our practice,” he said.

Kyle works alongside long-time attorney Mike Rider. “My dad and Mr. Mike were friends before I was even born,” he said. “So, that’s where the relationship started. Mr. Mike and my dad both played golf and I would join them even as a young boy.”

Kyle chose to attend SFSC right out of high school rather than go directly to a university. “It’s a smart financial decision for kids to stay here,” he said. “Having a dad in banking, the fiscal responsibility was instilled in us, but it wasn’t something our parents pushed on us.”

Kyle was awarded Top Ten and Bright Futures scholarships for college. “One of the big draws to SFSC was the cost of college,” he said. “I worked while I was in school, so I was saving money. I mowed yards in Sebring with my brother-in-law who has a lawn company.”

“A lot of kids, when they’re in high school, can’t wait to get out of Highlands County,” he said. “I never had the desire to leave Lake Placid as soon as I could. I didn’t have that need or that desire to leave. Certainly the community and the closeness of my family was a big part of it.”

While attending SFSC, Kyle developed an interest in attending law school, so he went to Rider to ask him about the practice of law and what it entailed. During the summer between his junior and senior year at the University of Florida, he interned in Rider’s law office. After his first year in law school, he held internships during the summer and during winter breaks. “I came back to the law firm as much as I could,” Kyle said. “I jumped at the opportunity.”

In fact, Kyle has been able to make use of his knowledge of agriculture in his law practice. “We represent different businesses, many of those are in the agricultural industry—citrus, cattle, etc.”

Kyle has found that being part of a close-knit community further assists his practice and credits two people in his life for helping him. “The business of law is all relationship-based,” Kyle said. “Anyone in the community can tell you that my dad and Mr. Mike have a strong work ethic and are honest. Just being in the community isn’t enough. I’ve had success because of the character of the two people I’m associated with. I played golf through high school and had the benefit of playing golf with my dad. He introduced me to a lot of people through golf and I’ve built relationships with them over time. It’s a benefit for people to know who you are. Most people wouldn’t know who a 25-year-old attorney is, but thankfully, I’ve had the opportunity to sit in front of many people in the community at this table.”

Kyle sees the community as a source of strength. “It’s not always easy in business to be honest and have integrity,” he said. “All of that is rooted in your faith and what a small community instills in you. The more time you spend here, it grows on you and you become that wholesome, small town-type of person,” he said. “The more you are in this community, the more you become like this community. I think those are good values to extend to people.”