AVON PARK, Fla.–May 31, 2016–When Hardee County native Daniel Witt graduated from high school in 1986, he wasn’t sure what he would do. But he knew for whom he would work.

“Growing up my dad was in the U.S. Navy and the family traveled the world with him,” Witt said. “I knew I too would serve and did that by enlisting just two weeks after finishing high school.” 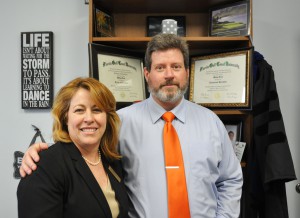 Daniel Witt (right) with Maday Leon, while on a visit to the SFSC Highlands Campus after his graduation.

After 20 years riding frigates and destroyers—sailor speak for serving on a ship—, and showing others how to keep the Navy’s ships secure, Witt earned his retirement. But the relatively tranquil life after military retirement didn’t sit well with Witt.

Now he is set to embark on new career journey. Witt, who graduated in May with the inaugural Bachelor of Science in Elementary Education (BSEE) class at South Florida State College, will teach fourth graders in Hardee County this fall.

As it happens, this won’t be Witt’s first time teaching.

Fresh out of high school, the Navy sent Witt to the Great Lakes Naval Station in Illinois. He trained as a gunner’s mate. “What does a gunner’s mate do on a ship do,” Witt said, with a quizzical expression. “Well, we handle ship-borne weapons systems that blow up other things, like enemy ships, submarines, or land targets.”

Witt became expert at maintaining the Harpoon missile that can skim the ocean surface in search of hostile ships. He worked to keep the ASROC anti-submarine missile system at the ready, giving his ship the ability to fire a missile at submerged submarine as far as 12 miles out from his vessel.

Prepping the Tomahawk cruise missile for firing also came under Witt’s watch. The missile that hugs the earth’s surface while in flight can destroy a target 1,200 nautical miles from the ship with pinpoint precision. For the non-sailor, that’s 1,380 land or statute miles.

In late 1990s, while serving in the Persian Gulf aboard the USS Curtis Wilbur, an Arleigh Burke-class destroyer, Witt and his shipmates nearly had chance to try their hand at getting bin Laden. “We were in the gulf and got orders to go black,” Witt said, referring to shutting down all the ship’s electronic systems—including the radar—in order to avoid detection.

“In the middle of the night, we went to general quarters and starting spinning the Tomahawks to ready them for launch because there was a fix on bin Laden’s location,” Witt said. “But the orders were countermanded at the last minute by President Clinton.”

In 2006, Witt left the Navy with a monthly retirement check and benefits from the Montgomery G.I. Bill that would pay for four years of college coursework. But he had no plans to start taking classes. “I put in 20 years of work and I was ready to do my own traveling and have time for relaxation,” Witt said.

After several years of travels and working as an airport screener for the TSA in Tennessee, Witt moved back to Hardee County to join his family. “I started thinking about those G.I. Bill benefits and knew it was time to start college, so I went to the SFSC Hardee Campus and enrolled with a plan to earn an Associate in Science in information technology,” Witt said.

“Right into my first term I fell in love with college work at SFSC,” Witt said, recalling that he opted out of starting college while in the Navy. “After sitting down with Teresa Crawford [the SFSC Hardee Campus director] to discuss my long range plans, I decided to switch to the Associate in Arts degree program because I would have more options to transfer to a four-year university.”

Witt said he took a course load heavy with math. “I was a techie in the Navy, so I thought engineering was in my future,” Witt said. “But when I got to the electrical side of physics, I thought maybe engineering wasn’t for me.”

Still, Witt graduated with his associate degree in May 2013 and took the summer off to think about his next two years. “I went back to the Hardee Campus folks to talk about my options,” Witt said. “I can’t say enough about those guys. They got me thinking about the bachelor’s degree program in elementary education.”

Not entirely sure if he was a fit for the elementary school classroom, a lifelong bachelor, Witt took preparatory education coursework that required logging in classroom observation hours. “I had a blast in the classroom,” Witt said with marked air of enthusiasm. “I said let’s give this a go!”

SFSC launched the two-year BSEE program with start of the 2014 fall term. Students who have an Associate in Arts (AA) degree, passed a state-mandated test, and completed prerequisite education courses, are eligible to enroll in the program.

In the fall of 2014, Witt joined the alpha cohort, the 18 students who comprised SFSC’s first class of BSEE students. “The first term was a bit rough for all of us, and we lost a few students, but by the second term we all got the rhythm of the pace of studies,” Witt recalled.

Witt got assigned to Bowling Green Elementary School in northern Hardee County to finish out his last internship.

Maday Leon, the lead instructor of the SFSC BSEE program dropped in at Bowling Green for a routine site visit. “What I saw that day made me so proud of our students,” Leon said. “One of the teachers was having difficult time with a young boy and called Witt for help.”

Leon said Witt’s intervention calmed the student. “I said to myself this fellow is going to make a wonderful teacher,” Leon noted.

The principal at Bowling Green had the same thought. She told Witt after he passed the final state-required certification examination, he had a job teaching fourth graders. Witt had a job and had not yet picked up his diploma from SFSC.

“All those math courses I took in my first two years now come in handy,” Witt said with laugh. “I’ll teach math to the fourth grade kids starting in August.”

Witt said he owes a debt to J.J. Moye, SFSC professor of mathematics. “Prof. Moye was an amazing instructor,” Witt said. “He had a knack for taking difficult math problems and getting students to understand them”

“I’m going to use his approach when working with my students,” Witt said.

Witt also showered praise on the BSEE faculty. “The faculty are dedicated to student success,” Witt said. “We had one instructor delay her retirement so that she could see us through to the end.”

Speaking like a gunner’s mate, Witt said, “When you finish this program, you come out fully loaded.” He noted that, unlike similar programs, SFSC students graduate with endorsements in reading and English for Speakers of other Languages (ESOL), both of which are of interest to principals aiming to hire highly qualified teachers.

When Witt steps into the classroom this fall, it won’t be his first time teaching. “My last assignment in the Navy involved using my years of experience to teach sailors how to protect our ships when they were in port,” Witt explained. “I remember that as one of my coolest assignments—teaching young sailors what I had learned.”

Before Witt gets involved in the rigors of the school year, he will enjoy his favorite pastime: reenactment. “I’m a member of the 2nd Florida Volunteer Infantry,” Witt said. “We get together with other groups to reenact Civil War battles, which is an endeavor that really means a lot to me.”

A self-described history buff, Witt has traveled with his fellow volunteers to Gettysburg, Manassa, and Antietam Creek to reenact historic battles, meeting up with as many as 10,000 others from across the nation. “At times one would almost forget the battle was a reenactment,” Witt said. “When you see the glint of the enemy’s rifle across a field, you can’t help but get a feel for what a soldier 150 years ago thought at that very moment.”

Come August, Witt will be meeting up with fourth graders for a real life encounter.

“When I was in the Navy, I went to work every day thinking I was doing something important,” Witt said. “When I retired, I wasn’t making a difference.”

“But when you are teacher, you’re making an impact every day on young lives by influencing their futures,” Witt explained. “I can’t think of many jobs where someone can say he or she has made that kind of a difference.”