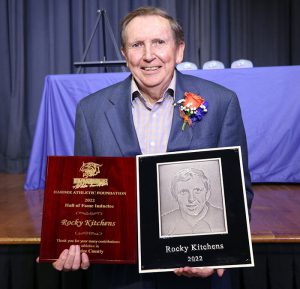 Kitchens with induction plaque and photo

AVON PARK, Fla. – Jan. 24, 2023 – Rocky Kitchens, a former Panther basketball player, was inducted into the Hardee Athletic Foundation Hall of Fame during a ceremony at the Hardee Agri-Civic Center in Wauchula on Saturday, Jan. 14.

Kitchens was one of the first students to sign an athletic scholarship at South Florida Junior College (now South Florida State College). Coached by Dunning Terrell, the team earned 19 wins and 14 losses during its first season of 1966-67. He was also a member of the College’s first Student Government Association (SGA) council. Kitchens graduated with his Associate in Arts from SFJC on May 1, 1968.

Through his career, Kitchens was a teacher, coach, and community education director. He served as deputy superintendent of Hardee County Schools for 16 years. During those years, he was on the founding and construction committees for Hilltop Elementary School and Hardee Junior High School. 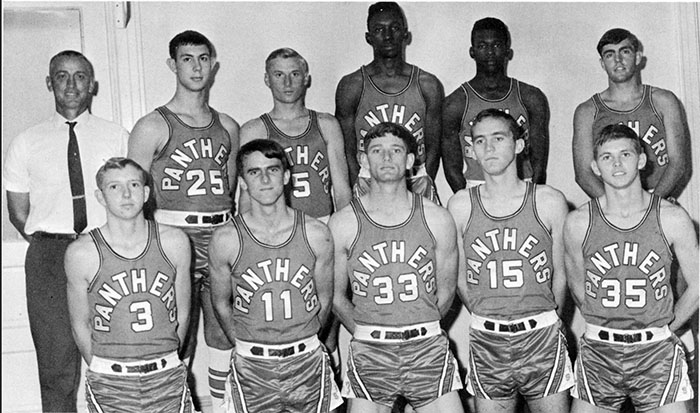 “The Hall of Fame was created to honor those individuals who have positively impacted Hardee County athletics and devoted extraordinary efforts in doing so,” said Derren Bryan, president of the Hardee Athletic Foundation and member of the SFSC District Board of Trustees. “In Hardee County, we speak of the ‘Wildcat Way’ or the character expected of CATS: Character, Attitude, Trust, and Strength. We wanted a way to keep that legacy alive. We wanted to reflect on the memories of those who instilled these qualities and work ethic in all of us. Anyone who walks through the Hall of Fame entering Wildcat Stadium can see our history and many who are responsible for a lot of what they have been blessed to experience in their lifetime. The selection process is never taken lightly by the Board of Directors. The Board wants the Hall of Fame to represent to the community citizens set apart for excellence as well as having made an impact on Hardee athletics.”

Wildcat Stadium is the home of the Hardee Senior High School Wildcats in Wauchula.

“The Hardee Athletic Foundation can proudly say that Coach Kitchens and many of the other Hall of Fame members remain actively engaged in our community today,” Bryan said. “They invest time and effort to assist our youth by serving on committees in the community, in their churches, and in other ways.”