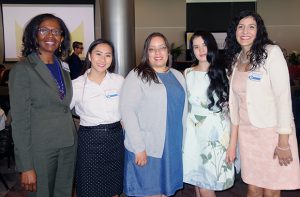 The four SFSC students were recognized at an awards ceremony April 7 in Tallahassee. The SFSC students earning the recognition were Margaret Dunn, Kelsey Pena, Abigail Wiggins, and Summer Xiong. They joined 127 of their peers from the 28-member FCS in being named to the academic team.

“This is the 23rd year that the Florida College System has selected an All-Florida Academic Team,” said Madeline Pumariega, the FCS chancellor, in a message to the students. “Our state relies on students like you who earn high-quality degrees and contribute to the skilled workforce fueling Florida’s economic growth.”

The students attended a luncheon where they were presented with a medallion recognizing their achievements. Dr. Sonji Nicholas, sociology instructor, and Michelle MacBeth, Spanish instructor, accompanied the students to Tallahassee. Both instructors serve as advisors to SFSC’s PTK chapter. SFSC president Dr. Thomas C. Leitzel was on hand to watch the students receive their awards.