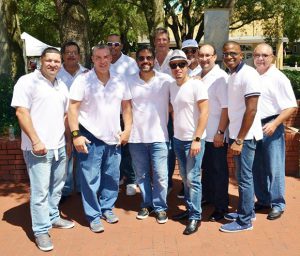 SFSC Performing Arts together with the City of Avon Park and Sebring Radio Group will present La Orquesta Caribeño Tropicale on Saturday, Oct. 21, at 7 p.m., in the 250-seat SFSC University Center, Highlands Campus, in Avon Park. A free percussion workshop for young people will be conducted one hour prior to the performance.

“Put on your dancing shoes and get ready to salsa!” said Cindy Garren, director of Cultural Programs. La Orquesta Caribeño Tropicale performs the heritage rich sounds of the Caribbean and Latin America including Puerto Rico, Cuba, Republica Dominicana, Panama, Colombia, Venezuela, and Peru. The 12-piece band is led by Miguel Lucas who put the band together to play more than salsa music. “I wanted to play merengue, bachata, cumbia, bolero, Son Montuno, and other genres of Latin music,” said Lucas.

Cumbia music is sometimes called the mother of all Latin music. The origin of the music comes from the days of slavery in the late 17th century and is derived from the African word cumbe which means dance. It is said to have predated and influenced other types of Latin music including Salsa. Cumbia, which has a simple, straightforward dance step, originated in Colombia and moved to Mexico in the 1950s where it became popular.

Nut n Fancy Food Truck will be onsite at the performance at 5 p.m., offering brisket and pulled pork dinners for $10. Other snacks are available. The food truck makes cash sales only. Seating for diners is available in the SFSC University Center lobby.

No tickets are required for the performances. All seating is first come, first served.  Persons requiring special accommodations, please contact the SFSC Box Office at 863-784-7178. More information and performance videos are posted online at www.sfscarts.org/kaleidoscope.

SFSC presents over 35 national and international touring artists at the 1460-seat Alan Jay Wildstein Center for the Performing Arts and the 250-seat SFSC University Center at the Highlands Campus in Avon Park.  SFSC offers a Matinee Series for adults at leisure, Young People’s Theater Series for school performances, Jazz Series, Trending Now Series of contemporary, family shows and the popular Artist Series. Group rates and subscriptions are available online and at the box office. Upcoming performances include: The Phantoms…Unmasked on Nov. 30, The Nutcracker on Dec. 5, and Grammy Award winner Petula Clark on Dec. 10.