From Moscow to Florida, It’s All Science for New SFSC Instructor 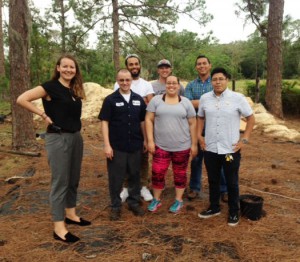 AVON PARK, Fla. – Feb. 22, 2017 – Dr. Tatyana Brusentsova, a physical sciences instructor at South Florida State College, made her first visit to the United States in 2002. Not for a vacation but to attend a scientific conference in Tallahassee, Fla.

“I remember saying to myself, ‘This state could be a very nice place to live,’” the Russian-born scientist recalled, as she gets ready to wrap up her first year with SFSC.

After the conference, she returned to her physical chemistry studies at Mendeleev University of Chemical Technology in Moscow. Back home, Dr. Brusentsova learned she had scored a green card in an annual lottery sponsored by the United States Department of State. She was one of 50,000 applicants who, each year, the State Department chooses at random to receive permanent resident status in the United States.

“I was already doing graduate-level work, so I decided to move to the United States to continue my studies at a research university,” Dr. Brusentsova said.

“Not knowing too much about particular American educational institutions, I started Googling lists of universities to see a where I could study,” she said with a cadence that showed a mastery of English with a decidedly Russian rhythm. “So, I started at the top with the A’s and found the University of Alaska and, in the C’s, I came across the universities in the Carolinas, then I came across the University of Central Florida.”

“Um, I said, a university in the center of Florida. I liked Florida. And I had an immediate interest in the symbolism of UCF, the Pegasus that represents the university and the motto of ‘reaching for the stars.’ But most important, I saw professors who were doing work in nanoparticles. That’s my field of study, and I figured this place fits me well.”

In Moscow, Dr. Brusentsova put her dissertation preparation at Mendeleev University on hold and arranged a visit to UCF, where she accepted an offer to join the physics program.

The then 24-year-old physical chemistry student entered UCF’s doctoral program in physics in fall 2005, specializing in spectroscopy of minerals, with the hope of delving into the mysteries of space dust, particles floating in space that could give a clue to the origins of the universe.

Dr. Brusentsova’s dual background prepared her for her course load at SFSC, where her teaching spans both sides of the line between the most sought after physical sciences classes: chemistry and physics.

“I don’t make a big separation between the two fields, but for some people it’s one or the other,” Dr. Brusentsova declared. “I’m lucky to have a grounding in chemistry from my Moscow-based studies and in physics from my coursework at UCF.”

Dr. Brusentsova noted that, while still a student at UCF, she earned her doctorate in physical chemistry from Mendeleev University.

“Staying on at UCF to complete my dissertation in physics would have taken another two years,” Brusentsova explained. “I figured one doctorate was enough—plus I wanted to get out on my own, start teaching, and live independently of grant-funded university research.”

After a several years as an adjunct instructor at Seminole State College and Valencia College, Brusentsova spotted an advertisement for a full-time position at SFSC teaching the physical sciences.

“I had never been to Avon Park but decided to come down and apply for the teaching job,” Dr. Brusentsova said. “What I saw was a beautiful campus, and a region with orange groves, lakes, and abundant natural habitat, and I liked it.”

Dr. Brusentsova said she thought there must have been a “mutual attraction,” saying members of the SFSC Natural Sciences Department liked her too because they offered her the job. She took up teaching chemistry and physics last August, and set about developing a new online course in physical sciences.

Dr. Brusentsova said physics, a subject she came to relatively late in her graduate studies, can throw up some challenges. “Still, I love teaching physics to the students at SFSC,” she said. “I keep reviewing the material myself because, in a sense, I’m still learning along with my students.”

Not only does Dr. Brusentsova straddle both sides of the fence in the physical sciences, she does so when it comes to calling a place home. She lives in temporary digs in Avon Park from Sunday through Thursday while she teaches at SFSC. She returns to her home in Orlando for a weekend of advanced mathematics classes at UCF, leaving no time for pets, hobbies, or marriage.

“I take the math classes for the physics—it’s like exercise for the brain,” Dr. Brusentsova said. “Someone remarked to me that’s easy to say.”