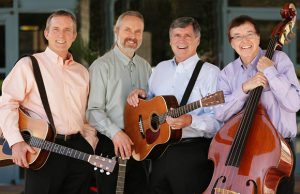 “People love the variety of this series,” said Cindy Garren, director of cultural programs at SFSC. “Plus, they can get home before dark. It’s a delightful way to spend a Tuesday afternoon.”

Ticket prices for the Matinee Series range from $12 to $28. Discounts are offered for a 10-show series subscription or 5-for-15 percent discount (buy any five Matinee Series shows and save 15 percent). Groups of 12 or more can save as much as 50 percent on admission, and the group organizer receives a free ticket. Friends, family, coworkers, social club members, or any organization can bring a group to a performance. Call the SFSC Box Office at 863-784-7178 for group pricing.

Phil Dirt and the Dozers takes audiences on a nostalgic musical journey back to the ’50s and ’60s on Jan. 9. “This show is lots of fun and our audiences have a great time dancing and singing in the aisles,” said Garren.

On Jan. 16, Dunlap & Pennington, who have been featured on PBS, perform Brahms to Broadway, Gershwin to Gaga on a grand piano and a 21st century instrument called a Wersi. A Wersi combines a computer, organ, and electronic keyboard to create the sound of a symphony orchestra.

The hilarious Edwards Twins return on Jan. 23 to portray beloved celebrities in an energetic musical revue. You might see Bette Midler, Madonna, Neil Diamond, Sonny and Cher, or Elton John. “This is a return engagement that is reminiscent of a Las Vegas revue,” Garren said.

Jason Farnham, who has been called the “21st century Victor Borge,” performs his classical remixes on Jan. 30. Farnham’s performance has been called a cross between Schroeder from the Peanuts cartoons, George Winston, and Victor Borge. Expect a fun audience sing-along.

Matinee Series subscriptions are $140, $165, and $190. Subscribers to the Matinee Series also receive a 15 percent discount on admission to any Artist, Trending Now, or Jazz Series performances. Subscribers also receive free tickets to the Peace of Woodstock concert, invitations to exclusive events, a 10 percent dining discount at the Hotel Jacaranda, and reduced processing fees.

The SFSC Box Office is located at the Alan Jay Wildstein Center for the Performing Arts and is open Monday through Friday, 11:30 a.m. – 2:30 p.m. Tickets and videos of upcoming productions are online at sfscarts.org. Telephone orders can be made at 863-784-7178.