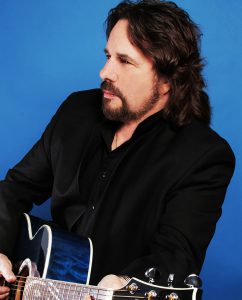 AVON PARK, Fla. – Feb. 2, 2021 – Songwriter Bertie Higgins mastered combining island sounds with country style and, in 1981, his single “Key Largo” quickly hit number one and spent 17 weeks in the Top 40. Higgins will appear at the Alan Jay Wildstein Center for the Performing Arts at South Florida State College in Avon Park on Tuesday, Feb. 16 at 1:30 p.m. Tickets are $22 – $26 – $36 and are available online at sfscarts.org.

“Key Largo” was heavily inspired by the 1948 Humphrey Bogart and Lauren Bacall film and became a “yacht rock” classic. His romantic, platinum selling album “Just Another Day in Paradise,” which featured “Key Largo,” also had another hit, “Casablanca.” “Casablanca” became song of the year in all of the Pacific Rim and Higgins became an international star, especially in mainland China and Japan. Other hits include “Pirates and Poets,” “Jamaica Me Crazy,” and “Son of a Beach.”

Born in Tarpon Springs, Florida, Higgins once supported himself as a sponge diver and he began his career in show business at the age of 12 as a ventriloquist. He won top prizes in local talent contests and became a favorite at school assemblies around Tampa Bay. Two years later, a battered set of drums forced a career change and he set off to follow the backbeat heard around the world—rock and roll.

After graduating from Tarpon Springs High School, Higgins enrolled at St. Petersburg College to study journalism and fine art, but the music continued to sing in his heart. He eventually left college and became drummer for the Tommy Roe band, The Roemans, who recorded “Dizzy” and “Sheila.” During this period, the band toured the world, starring alongside the Rolling Stones, The Beach Boys, Tom Jones, Roy Orbison, Manfred Mann, Peter and Gordon, The Dave Clark Five, and many more. At the height of Beatlemania, Higgins was playing with and learning from the best.

In 1980, Higgins moved to Atlanta and met record producer, Sonny Limbo. Limbo had played a role in developing the group Alabama and had been instrumental in the careers of several others. He arranged that fateful meeting between Higgins and music publisher, Bill Lowery, whom Higgins had known through Tommy Roe. The meeting of these three was destiny waiting to happen.

Higgins had been working on a song about a personal romance and that song was “Key Largo.” Higgins recorded the master and presented it to Kat Family Records, a newly formed record label distributed by CBS/Sony. At first, they rejected it. But after persistent requests from Higgins, Kat Family Records finally agreed to release the single in 1981 and pop music history was made.

At the Alan Jay Wildstein Center for the Performing Arts, following CDC guidelines and recommendations from the Event Safety Alliance, there are new protocols for health and safety. Face masks are required, including during the performance. All performances run 75–90 minutes without an intermission. Concessions are not available and patrons may bring a plastic bottle of water into the theater. All areas of the Performing Arts Center are sanitized and disinfected before every show.

The Alan Jay Wildstein Center for the Performing Arts is located at 600 West College Drive in Avon Park.  Parking is free. To contact the SFSC Box Office, call 863-784-7178.