J.C. Scott Graduates from SFSC in Pursuit of His Love for Agriculture 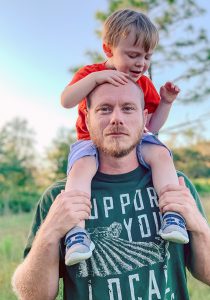 An Avon Park native, Scott is a farmer and recently started a small, local business. But his interest in law enforcement took him across the country, only to bring him back to his hometown.

Scott graduated from Avon Park High School in 2005 and received his diploma while in boot camp with the U.S. Coast Guard. “I wanted to go into law enforcement and into the military,” he said. “But I was torn as to which career to pursue. I decided to join the Coast Guard because it’s the only military service with law enforcement authority. And I grew up on the water and fished all the time.”

Immediately out of boot camp, Scott was assigned to a station in Homer, a town with a population of 6,000 in south-central Alaska, where he served as a Boatswain’s Mate (BM). “I was on a 225-foot seagoing buoy tender,” he said. “Our main job was to service aids to navigation—all the red and green buoys that indicate where it’s safe to navigate. We sailed from one end of Alaska to the other and went out to the Aleutian Islands. From there, you could see Russia in the distance. We would pull into little towns that had a population of 30 or 40 and we would double the population just by showing up.”

Scott was then assigned to a small boat search and rescue station in Destin, Fla., where he served for four years. During the time Scott served in Destin, his station conducted 350 search and rescue cases. “I was on about one third of those,” he said. “We worked on everything from plane crashes to flare sightings to lightning strikes to boat collisions. We also did a lot of recreational boardings—such as checking for life jackets and fire extinguishers.”

They also checked charter boats to make sure they had proper firefighting capabilities and weren’t dumping sewage or gray water. And they made sure that tug boats and barges had appropriate licenses.

When Scott was accepted as an MES, he was transferred to Chesapeake, Va. to the Maritime Security Response Team (MSRT), where he began a six-year billet.

“The MSRT specializes as a CBRNE unit,” he said. “It’s a chemical, biological, radiological, nuclear, and high yield explosives unit. An example is if intelligence was obtained that a container ship coming in had a dirty bomb or a biological weapon on it and the perpetrators planned to detonate it somewhere in the United States. MSRT is specially trained to handle that situation, take care of the terrorists, and secure the weapon.

So, we trained in full chemical gear — a rubber suit with a gas mask. You’re completely sealed in this suit so you can operate in that environment. Then you have your kit on top of that—ceramic-plated body armor, all your weapons, all your breaching equipment, and all your testing equipment to see what kind of environment you’re in. You’re wearing 60 to 80 lbs. of gear, and it’s like wearing a sauna suit with a gas mask.”

Scott trained for two years with the MSRT when disaster happened. While heading across the top of an obstacle course, he slipped and fell, landing upside down. He hit his head and broke his back. Without knowing that he had damaged his back, he completed the obstacle course. Sometime later, he was at the firing range, lifted his rifle, and his right arm wouldn’t respond. A medical exam determined that cysts had developed in the middle of his spinal cord, causing him to lose function in his right arm.

So instead of continuing training in Chesapeake, Scott was sent to a small boat station in Ketchikan, Alaska, where he was placed in charge of the armory and headed the law enforcement training program.

“I loved that unit,” he said. “I had a great command and I worked hard for them and they worked hard to make sure I got all the treatment I needed.” Eventually, he took a medical retirement after 11 years in the Coast Guard and returned home to Highlands County, Fla.

When Scott first returned home, he walked with a cane and his right side was shutting down because of the cyst. But he and wife, Stephanie, got a small vegetable farm up and running. But Hurricane Irma descended, wiping out the farm. When it was re-established, the Scotts lost bushels of produce due to theft.

But Scott’s determination prevailed. “I knew I wanted to do something in agriculture,” he said. While at MSRT, gardening became Scott’s stress relief. He and Stephanie raised chickens and meat rabbits and had grown a large vegetable garden that supplied much of their family food while in Chesapeake, Va.

“MSRT was stressful,” he said. “You jumped out of helicopters and shot guns all day and wore heavy kit while doing it. I needed good stress relief, and gardening provided the nice quiet time that I needed.”

With the assistance of the GI Bill, Scott applied to SFSC to study agriculture. It was also the point at which he found a doctor who helped restore the mobility in his legs and arms.

In 2019, Scott and his wife purchased a house on 10 acres that’s almost a stone’s throw from his family home. “It’s about a quarter of a mile from where I grew up,” he said. “I joined the Coast Guard, went to Alaska and Virginia, and just ended up right back less than a mile from there.”

Although Scott’s health concerns were progressing in a positive direction, he still had trouble bending over to harvest vegetables and decided to focus on fruit trees. “A friend of mine gave me some mangoes that he grows at his house,” he said. “I didn’t even like mangoes before, because the ones you get at the grocery store don’t taste very good. But the mangoes from my friend were another story and that got me headed down the mango road.”

While researching mango cultivation, he was discouraged from growing mangoes in Highlands County. “The University of Florida told me that you can’t grow mangoes here,” he said. “But if you drive through Avon Park, I don’t think I can count as high as the number of mango trees that grow here. My friend’s mango tree is over 70 years old, so it survived all the freezes we’ve had. Although mango trees are vulnerable to cold, you have to take precautions but it’s do-able. I’ve taken a lot of citrus courses at the College. Because the nutritional requirements for mangos are so similar to citrus, that information has been helpful.”

Currently, Scott has an acre grove on which he’s testing up to 27 varieties of mangoes. In the meantime, he and Stephanie have started a coffee business—not growing coffee but selling it. “My wife wanted a coffee business and I want to be a farmer. A mango grove takes a few years to get going and it costs money to get everything established. You have to wait, so we started the coffee business to fund the farm to get it on its feet. My end of it is that I get to sell produce from it on the side. I started selling vegetables because it’s locally grown, organic produce. Many local produce stands get their vegetables from Plant City and much of that produce comes from overseas.”

Scott explained that mangoes are a higher value crop and although 500 varieties of mango exist, only two varieties are sold in the United States. Scott wants to expand the market and the flavor palate. “I never knew that there were mangoes that tasted like orange sherbet or piña colada or pineapple, or coconut.”

“When we decided to start the coffee business, we wanted to stand out,” Scott said. “I grew up in agriculture—that’s what I wanted to do. So we decided we would take a horse trailer and convert it into a coffee trailer that had that branding and look.” Scott’s coffee business was named partly for his grandfather’s cattle ranch brand: Rocking JS. And as luck would have it, all five of his children’s names, including his foster daughter, begin with the letter “J.”

“We serve coffee- and expresso-based drinks,” he said. “All of our coffee drinks that aren’t espresso are cold brewed.” The coffee business opened in the middle of Tropical Storm Eta and the Scotts’ coffee trailer is often seen during festivals and other such local events.

After earning two degrees and two College Credit Certificates in agriculture from SFSC, Scott would like to continue his education toward a bachelor’s degree in agriculture. “I know that SFSC partners with Warner University in Lake Wales, Fla. to accept the agriculture degree,” he said. “I haven’t looked into it too much at the moment because I’m looking forward to the break from college next semester.”

Scott has educational advice for prospective students. “Just going blindly and wanting a bachelor’s degree in a certain field that they don’t know much about can cause people problems,” he said. “The Career Development Center at SFSC is really good about helping people learn about all aspects of a potential job and the degree they would need for that particular job. People should spend time in the Career Development Center before they pick their major.”

“J.C. and I met when I was working in SFSC’s Advising and Counseling Center,” said Rob Hampton, director of the SFSC Career Development Center and the College’s Veterans Affairs certifying officer. “I was advising him for our A.S. in Landscape and Horticulture Technology program and we started talking about agriculture. We figured out quickly that we, as two old veterans, had a passion for agriculture. And there have been many times when I reached out for some farming advice. Thanks to J.C., my green thumb has gotten a lot greener.”