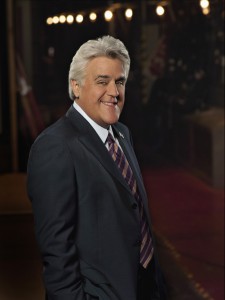 Leno, who dominated late night television ratings for two decades, has returned to television with a new weekly, one hour CNBC primetime series, “Jay Leno’s Garage.” The series will cover all things automotive including classic cars, super cars, restoration projects, road tests, investments, and the inner workings of the car collectors’ market. “Jay Leno’s Garage” explores the world of cars, never forgetting that it’s the people behind the wheel who provide the real stories. Jay will travel the country on the hunt for the car world’s most radical rides and highlight the passion and the stories behind them.

Honored by the Television Academy with an Emmy for “Outstanding Comedy, Variety or Music Series” Leno is the recipient of the People’s Choice Award and a star on Hollywood’s Walk of Fame.   He is also the first person to drive the pace car of all major NASCAR events.

Opening the performance is Don Most who is best known for his co-starring role as Ralph Malph on the long running television series “Happy Days.” Most is currently touring the country with his jazz sextet performing standards from the Great American Songbook. The Hollywood Times calls his show “first rate” and “hotter than July.”  Recently, Most was seen in a recurring role on the hit TV show, “Glee,” as well as starring roles in the indie film, “The Yankles,” and “Chez Upshaw,” starring Kevin Pollack and Illeana Douglas.

SFSC presents a cultural arts series of performances from November through April.   Upcoming performances include The Midtown Men on Dec. 5; Blue Suede Shoes on Jan. 9; The Willis Clan on Jan. 23; The Buddy Holly Story on Feb. 4; Ballroom: South Beach Style on Feb. 16; Saturday Night Fever on Feb. 24; and Bobby Vinton on March 22.   For season information and videos, visit www.sfscarts.org.