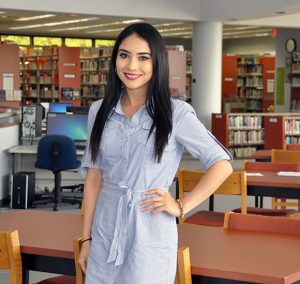 AVON PARK, Fla. – April 24, 2019 – From the time she was in high school, Mishel Mandujano Manriquez knew that she wanted to become a teacher. On Tuesday, May 7, at 4:45 p.m., Mandujano will be on her way to fulfilling that dream when she receives her Bachelor of Science in Elementary Education (BSEE). She will tell her inspiring personal story when she approaches the podium as student speaker that same evening during South Florida State College’s (SFSC) spring Commencement ceremony. This will be Mandujano’s second degree from SFSC—in May 2017, she earned her Associate in Arts degree.

During the year between high school and when Mandujano entered SFSC as a student, she volunteered as a teaching assistant at elementary schools in DeSoto County. While working with a kindergarten class, she decided that kindergarten was the grade she wanted to focus on.

“The kids were so loving,” Mandujano said. “I woke up each morning wanting to see them and be with them. Kindergarten students are kind, innocent, genuine, eager to learn, and caring. When you start teaching children at a younger age, your impact on them is greater because they’re still developing their personalities and their values.”

True to her own inclinations, Mandujano looked into SFSC’s Bachelor in Science in Elementary Education (BSEE) program while working on her Associate in Arts degree. “When I found out about the BSEE program, I thought, ‘That’s perfect for me.’ It was close to home, affordable, and the exact program that I wanted.”

Mandujano spoke with BSEE program lead instructor, Dr. Maday Leon, to learn more about it. “I found out about the pre-requisites, and Dr. Leon told me that I would first need to take the General Knowledge Test (GKT). I studied for it and passed it.”

But Mandujano’s foundations for her desire to teach were built on life experience. “My father, Erubio Mandujano, who was living and working in Texas, had been diagnosed with cancer. When he was getting treatment, my mother came to Texas from Apaseo el Alto, Mexico to care for him. The doctors said he was in the last stages of the disease, so my mother and my father’s family, who were already living in Texas, requested that my brother and I come to the United States to see him. After some months in the country, my brother and I had to be enrolled in school.”

Mandujano explained that the transition to the United States and school were difficult and that everything was challenging. “I didn’t know that side of my father’s family,” she said. “We lived with them and had to get to know them.”

For Mandujano, the experience of moving from a small city in Mexico to Dallas was culture shock. “Just to see the people—the way they dressed and looked—everything was impressive. I had never seen an American before. It was all new. And not knowing the language is difficult when you have so much to say. It was frustrating.”

But Mandujano learned English quickly. “In Texas, they had English classes in high school for new immigrants,” she said. “They had three levels, and you moved to the next level according to how proficient you became. I had reading and writing classes to learn English, as well as science and geometry classes taught in English, and a Spanish class.” At home, she practiced her English with her cousins and listened to music in English and watched movies with subtitles in English.

Mandujano laughed and said, “I wasn’t allowed to participate much in the Spanish class because I knew the language and grammar so well.” She, eventually, was given full credit for Spanish in high school and wasn’t required to take another foreign language.

After her father passed away, Mandujano’s mother wanted to be closer to her own family who were living in Florida. So Mandujano, her mother and brother moved to DeSoto County in 2012. Mandujano graduated from DeSoto Senior High School and, eventually, went on to graduate from SFSC and enter the BSEE program.

“In the BSEE program, we’ve gotten a great deal of support from our professors,” Mandujano said. “They care about your academics and personal concerns. They’re inspiring, too. They’re doing what they love, and it motivates you as a student.”

Mandujano said that she went through BSEE as part of a small cohort which enabled the students to build strong and lasting relationships with each other. The students all participate in internships within the school system, giving them an opportunity to assess whether or not teaching is a personal calling. “We also focused on English for Speakers of Other Languages (ESOL), which I identify with. It’s about making people from other cultures feel included and embraced, and part of the community. It was, particularly, heartwarming to me.”

Mandujano believes that teaching is an important career choice to make. “Students spend most days with teachers, so the teacher can be a source of inspiration and can shape a student’s life. If we teach students to love to learn, respect others, and follow their dreams, they’ll do it. We can empower them starting at a young age.”

Even before finishing her bachelor’s degree, Mandujano has been offered positions with two of the local schools in which she served her teaching internships. However, she’s considering if she should follow her dream to teach English abroad. “I like learning about other cultures,” she said. “English programs are taught all over the world, and it would fulfill my passion for teaching and traveling. I overcame the barrier and fear of coming to a new place to live, so now I have the confidence and desire to see the world.”

Whatever choice Mandujano makes, she will bring her own life experience to the task. “My personal experience has made me aware of the struggles that some students may face at home,” she said. “If a student is not willing to do the school work, something may be going on at home that we don’t know about. As teachers, we need to be a support system for the students. I had people who served as a support system for me, so I want to help others. Some people feel stuck in their situation and feel there’s no way out. I was there, so I understand. When kids know someone is there on their side, they are better able to succeed.”