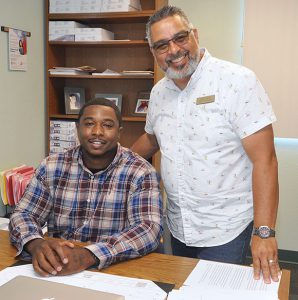 AVON PARK, Fla. – June 24, 2019 – Antonio James believes in having a purpose. After participating in the Panther Youth Partners (PYP) Program and now a program specialist with PYP at South Florida State College (SFSC) since August 2018, he can pass along his wisdom to other youth in the community.

James has a lot to share—his early life was fraught with challenges. He played football while in high school in Arcadia, Fla. and, like other young athletes, he wanted to become a professional football player. “I haven’t always been the person I am now,” he said. “I grew up in an atmosphere where all the guys had girls and a lifestyle around drugs. My idea in high school was to sell drugs for the rest of my life or make it in football.”

But James’ mother and grandparents kept him in their prayers, and it seemed to make a difference. When he graduated from high school, James received a phone call from someone in PYP telling him that if he went to college, he could make money. “Then I met Eddie Cuencas, program specialist in youth services at South Florida State College,” James said. “He explained the program to me and confirmed that I could get paid to go to school.”

The PYP Program, through SFSC and CareerSource Heartland, helps youth between the ages of 16 and 24 gain skills that lead to employment. Services offered to participants are academic support; advisement in financial aid and financial literacy; assistance with career development; job shadowing; workshops that improve employability; and personal, academic, and career counseling. Participants must reside in Hardee, DeSoto, Highlands, or Okeechobee counties, be a junior or senior in high school, or be out of high school with a desire to earn a GED or vocational certificate. PYP participants receive a stipend based on family income, class attendance, teacher feedback, grades, and work readiness activities.

“I joined PYP for the money really,” James said. “I was still selling drugs, but Eddie kept mentoring me. And with the prayers of my mother and grandparents, over time, things started changing for me.”

“When Antonio came to my office, he wasn’t sure where he was going because of the lack of community support regarding preparation for what happens after high school,” Cuencas said. “That’s what makes all of our outreach programs at SFSC significant. They are beneficial to all the young people we work with.”

James attended SFSC but stopped out of college to take a job at the Avon Park Correctional Institution, where he worked for nine years. However, while with the institution, he earned a Correction Officer Occupational Certificate from SFSC’s Criminal Justice Academy in 2010.

“In the midst of working there, I began to develop into the person I am now,” he said. “Corrections is rehabilitation to help the inmates change behaviors for when they get out of prison. If you ask them why they committed a crime, eight out of 10 will say it’s from not having a father. So a lot of young men connect with gangs, and it takes the place of the father and a family that cares.”

Eventually, James took a position as a corrections officer with PRIDE Enterprises, a private, not-for-profit corporation that funds and operates inmate work and training programs and offers post-incarceration job placement and support services.

“I worked for PRIDE for three years and loved what I was doing,” he said. “Pride was positive and productive for the inmates. It’s like going from hell to heaven. The inmates want to be at work.” At PRIDE, inmates can learn about tire refabrication, chemical manufacturing, auto mechanics, printing and digital imaging, and welding and cabinetry.

James returned to SFSC as a student and earned his Associate in Arts degree in 2016 and, in August 2018, he joined SFSC as a program specialist with PYP.

“I got to a time when I felt like I was stuck and I was being called to move on to something else,” he said. “I talked with my wife and prayed about it. I want to be that person who makes a difference in other people’s lives. When I was looking for a job, the position at SFSC popped up. Where I came from, this job has made a difference in my life.”

James now counsels and mentors other young people and can speak from his own life experiences.

“We can see how this and other programs such as Take Stock in Children and Big Brothers, Big Sisters benefit our community,” Cuencas said. “The mentoring component of our programs is important to young people’s lives. It starts as a friendship and develops into a trusting relationship. You can then challenge a young person to pursue their goals. You can try to inspire and encourage someone all day long, but it all goes back to the friendship and relationship. Young people need someone to talk to. Antonio and I built that kind of relationship over time.”

James’ connection to PYP is strong also because his wife, Rasheena, participated in the program while in high school. Rasheena is now a nurse practitioner at Highlands Regional Medical Center.

“Antonio’s an amazing father, husband, and son,” Cuencas said. “He now has a daughter who’s looking up to him. So, he takes being a good father and community member seriously. Having become a father himself has allowed him to be a father to others as well. He has such a caring heart. He, genuinely, cares about every young person who comes in the door.”