AVON PARK, Fla.–May 27, 2016–Kevin Brown, who has overseen South Florida State College’s applied sciences and technology programs for 18 years, will bring his academic career to end with his retirement on May 31. 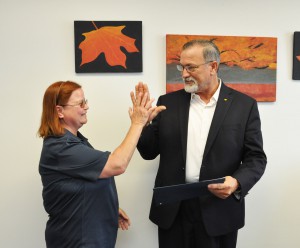 Lena Phelps, membership coordinator for the SFSC chapter of the Florida Association of Colleges congratulating Kevin Brown on his retirement.

“It’s time for me to turn the page and move on,” Brown told a group of well-wishers who turned out for a reception honoring him. “In one sense, I feel as if I won the lottery because retirement guarantees me an income without having to show up for work anymore,” he said, to the laughter of his colleagues.

Brown started with SFSC in fall 1998. His arrival came after a nearly two-decade career with the Hardee County School District. At the close of a 14-year stint teaching agriculture to students at his alma mater, Hardee Senior High School, Brown headed up the district’s vocational programs for five years.

It was Brown’s experience in vocational education that brought him to the attention of SFSC’s then dean Michele Roberts. Brown said in his 19 years with the Hardee County School District, he never applied for a job elsewhere. But Roberts convinced him he could make a greater impression on the future of students at SFSC.

At first, Brown assumed the title of director. Within two years, he was named dean, placing him over educational programs that ranged from practical nursing to electronics to network service technology.

At the time, then president Dr. Catherine P. Cornelius lauded Brown’s stewardship of the program for matching “training programs to business and industry need” and for helping “well-trained graduates move into satisfying jobs.”

In his 18 years at SFSC, Brown has overseen a major expansion of the college’s educational offerings.

Brown said physicians and doctors in SFSC’s service district of Hardee, DeSoto, and Highlands counties had expressed a need for a local source of radiographers.

“We heard that need and worked some magic finding space and funding,” Brown said. “In the end, we played with the blueprints, found the money, and SFSC now has an accredited radiography program.”

During Brown’s tenure, he guided SFSC’s launch of its first four-year degree program, the Bachelor of Applied Science in Supervision and Management (BAS-SM). For the first time in its nearly half century of operation, SFSC’s students did not have to move to Tampa, Orlando, or Gainesville for a full undergraduate education.

In 2014, Brown was also instrumental in shepherding through to fruition another four-year program, the Bachelor of Science Degree in Nursing (BSN). While SFSC already had an Associate Degree in Nursing (ADN) program that graduated RNs, the health care system has increasingly demanded nurses with higher educational achievements.

“Without a doubt, Dean Brown has left his mark on SFSC’s applied sciences and technologies programs,” said Dr. Sidney Valentine, the college’s vice president for academic affairs and student services. “Dean Brown was instrumental in launching programs such as radiography, as well as bachelor’s degrees in supervision and management as well as nursing.  SFSC students are finding rewarding careers because Dean Brown helped launched programs for in-demand jobs.”

As Brown was preparing for his retirement, he didn’t ease off on his drive to expand educational programs at SFSC. Working with members of the Florida Legislature and local stakeholders, Brown took the lead in bringing a fire science program to SFSC in 2015.

Florida’s Heartland now has its own facility at the SFSC Highlands Campus where residents can attain the training required to serve as a certified firefighter.

“It is hard to say goodbye to someone who has done so much for so many,” said Rebecca Sroda, dean of SFSCs health sciences programs.

“He has found funding for faculty to obtain advanced degrees, wrote grants for special projects, and provided strong support in obtaining national accreditation for our programs. Kevin has been our students’ and employees’ biggest champion and always had their back,” Sroda said.

The SFSC chapter of the Florida Association of College presented Brown with a certificate of appreciation for his service to the students at SFSC and for 17 years of service to the association.

Brown has mapped out a busy routine as makes way for his successor, SFSC professor Erik Christensen, to succeed him.

Brown never forgot his roots as a young man teaching agriculture to Hardee High School students. He has been active in Florida Future Farmers of America (FFA), helping sponsor a chapter at SFSC. The state organization gave Brown its Honorary State FFA degree, an award that recognizes members for their lifelong commitment to agricultural education.

After 37 years helping the region’s students get the education they need to succeed, Brown’s retirement from SFSC won’t mean an end to his teaching. Brown is researching how he can open the ranch up to young people so that can learn about agriculture.

“I’m hoping to start a program that will promote agriculture to young folks,” Brown said, pausing for just moment. “Yeah, that’s what I want do now.”