AVON PARK, Fla. – Jan. 25, 2017 – Mary von Merveldt, a nursing instructor at SFSC since 2009, has been promoted to director of the college’s Nursing Education program. 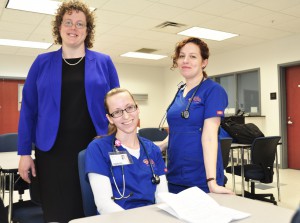 She succeeds Dr. Michele Heston, who took over as dean of the Division of Health Sciences last September.

“I approach my promotion with a dedication to our students and our faculty,” von Merveldt said. “Dr. Heston has done a beautiful job of forming a strong foundation for us and I’m eager to take up the challenge of making this the best learning environment for our students and faculty.”

Her academic interests at graduation centered on graduate work in behavioral pharmacology, with a thought of entering medicine.

“The University of Florida has one of the best behavioral pharmacology programs in the country,” said von Merveldt. “So, I started their program right out of Allegheny in 2004.

During her graduate studies, von Merveldt felt a pull that steered her in new, though complementary direction.

“I did behavioral analysis with young people challenged by autism and Down’s syndrome for spell while in Gainesville,” said von Merveldt. “I found that I enjoyed the people aspect to this work.”

She added, “I came to the conclusion my newfound draw to the human side of the work would harmonize with my interest in health sciences by pursuing a career in nursing—it’s a profession that pulls in both the caring and the science.”

Von Merveldt switched programs at Florida, entering the university’s accelerated nursing education track. She earned her Bachelor of Science degree in Nursing and moved directly into the master’s program, preparing her for work as nurse practitioner. She graduated in 2008.

Von Merveldt gained clinical experience in pediatric primary care at Gainesville’s Shands Rehabilitation Hospital and at Central Florida Healthcare in Avon Park, where she relocated to be closer to her husband’s family.

“I met Joseph in Gainesville at church,” von Merveldt. “We wanted to be close to both of our families, but settling in Tennessee so that we would be midway between both was a nonstarter, so we chose Highlands.”

Von Merveldt’s clinical background and studies in the health sciences got her the attention of SFSC’s Nursing Education program. She was hired as an adjunct instructor in 2009 and achieved full-time instructional status in 2012.

When the Nursing Director’s positioned opened late last year, she decided to apply.

“I thought I might be too much of a newbie here at SFSC and that made me hesitant to apply,” von Merveldt said. “But I see so much opportunity here and I’m willing to work and do my part to build on what Dr. Heston has achieved.”

She officially assumed her new role as director on Jan. 2.

“As a new year commenced, so did a new era in leadership for our college’s Nursing Education department,” said Dr. Michele Heston, dean of SFSC’s Division of Health Sciences. “From pharmacology to psychology to primary patient care to classroom nursing instruction, Mary von Merveldt has seen the broad picture of healthcare and is poised to provide strong leadership with a focus on student engagement, lifelong learning, and a commitment to advancing caring science.”

Von Merveldt will continue to teach students, at least through the end of the spring academic term. “I think it’s a good idea to keep your head in the classroom,” she said.

Her husband, who studied agriculture at Florida, currently stays at home to care for their 3-year-old daughter. “She’s a handful and keeps Joseph occupied the whole day,” von Merveldt said.  The couple, who live in Sebring, also have a 7-year-old boy.

“I go home tired,” she said. “But it’s not a bad tired. It’s the tiredness one gets from applying oneself, learning a new job, and knowing you’ve put in a good day’s effort for your students and peers.”