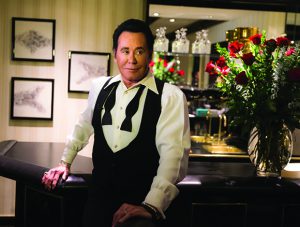 AVON PARK, Fla. – Feb. 18, 2019 – Wayne Newton, known worldwide as “Mr. Las Vegas,” epitomized the talent, glamour and energy of Las Vegas, and he’s bringing his “Up Close and Personal” performance to the Alan Jay Wildstein Center for the Performing Arts at South Florida State College (SFSC) in Avon Park on Thursday, Feb. 28 at 7 p.m. Tickets start at $55. Groups of 12 or more can save 20 percent on admission plus the group leader receives one free ticket.

In 1999, Newton became the first Las Vegas “headliner in residence” with his own showroom where he appeared six nights a week for 40 weeks. For many years, Wayne was voted “Entertainer of the Year” by both Nevada Magazine and Casino Player Magazine. Melissa Cook of Casino Player Magazine said, “…he consistently offers the best in entertainment value. Wayne Newton is in a class and category all his own.”

Newton, who has recorded and released 165 albums, learned to play piano, guitar and steel guitar by ear. He was doing a daily radio show at the age of 6, appeared with the Opry roadshows that came through Virginia and Tennessee and performed on weekends at local movie theaters. While in the first grade, he and his brother, Jerry, performed in a USO show for President Harry Truman.

At age 8, he won a local talent contest which provided him with an audition for “Ted Mack’s Amateur Hour.” “There are two people I know of,” said Newton, “who flunked ‘Ted Mack’ auditions: Elvis Presley and me.”

Continuing to perform throughout his teen years, Newton learned to play 13 instruments. Jackie Gleason invited him to perform his first national network television show and Newton performed 12 more times in the next two years. In the early to mid-1960s, he also acted and sang as “Andy” the baby-faced Ponderosa ranch hand on the classic western TV series, “Bonanza.”

His “Up Close and Personal” show is currently at Caesar’s Palace in Las Vegas. The show features performances of his favorite hits, showbiz stories, and candid conversations with questions from the audience.

The performance is sponsored by the Thakkar Foundation, Drs. Ashok and Raji Sonni and Coldwell Banker/Gary Delatorre.

Tickets are available online at sfscARTS.org, by phone at 863-784-7178 or at the SFSC Box Office located on the SFSC Highlands Campus at 600 West College Drive in Avon Park.