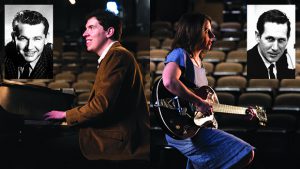 Coleman and Taylor of Nashville Legacy

AVON PARK, Fla. – Feb. 12, 2019 – Nashville native and pianist Jason Coleman and guitarist Meagan Taylor bring new life to the “Nashville Sound” at the Alan Jay Wildstein Center for the Performing Arts at SFSC on Tuesday, Feb. 26 at 1:30 p.m. Coleman, who is the grandson of Floyd Cramer, and Taylor, who is the niece of Chet Atkins, are masters of the “slip note” piano style and the virtuosity of “thumb and two finger” guitar style of country music.

“Jason Coleman wowed the audience when he performed here in 2016,” said Cindy Garren, director of cultural programs at SFSC. “There was a big demand to bring him back, and I’m thrilled to present his newest production. The show celebrates two giants of the country music industry, and it includes country favorites from Patsy Cline and others.”

Legendary country pianist Floyd Cramer, who grew up in Arkansas, taught himself to play the piano and, after high school, he landed the pianist job on the “Louisiana Hayride” radio show. In 1953, he cut his first single, “Dancin’ Diane” on Abbot Records. He hooked up with a young Elvis Presley, and they formed a close personal and professional bond.

In 1955, he moved to Nashville and became one of the busiest session musicians and recorded with Brenda Lee, Patsy Cline, Eddy Arnold and Roy Orbison. Cramer played piano for Presley on “Heartbreak Hotel.”

It was during this time that he developed the practice of “slip notes,” in which a note would flow seamlessly from one to the next. In 1960, he recorded the instrumental “Last Date,” which hit No. 2 of the Billboard Top 100 chart and sold more than one million copies. His next hit was “On the Rebound” which went to No. 3 in the United States and No. 1 in the United Kingdom. Cramer toured with Chet Atkins and Boots Randolph and had his last hit in 1980, a recording of the theme from the “Dallas” television show.

Chet Atkins, who was known as “Mr. Guitar” and “The Country Gentleman,” became an accomplished guitarist while in high school in Georgia where he used the restroom to practice because of the acoustics. In 1939, he heard Merle Travis on the radio which shaped his own finger-picking style.

Atkins received 14 Grammy Awards and the Grammy Lifetime Achievement Award. He also received nine Country Music Association Awards for Instrumentalist of the Year. He was inducted into the Country Music Hall of Fame, Musicians Hall of Fame and Rock & Roll Hall of Fame. Rolling Stone ranked him No. 21 on their list of “The 100 Greatest Guitarists of All Time.”

Nashville Legacy celebrates the genius of Floyd Cramer and Chet Atkins, who created the “Nashville Sound” which replaced the honky tonk sound with string sections, background vocals, and polished production. The performance is sponsored by Lampe and Kiefer Hearing Aid Center, The Palms of Sebring, and Clem and Betz Newbold.