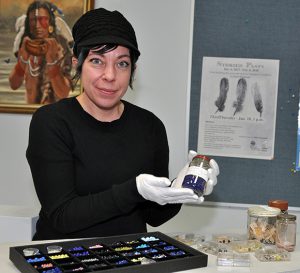 A visit to the Museum of Florida Art and Culture (MOFAC) on the SFSC Highlands Campus in Avon Park will reveal a display of artifacts from the Goodnow Mound. Unearthed from the mound, which is located south of Sebring, are artifacts that date back as far as the 16th century and are attributed to Native Americans of Southwest Florida. Over 6,200 glass beads have been recovered from the site. These beads, in particular, sparked an intense curiosity in Megan Stepe, MOFAC curator.

But Stepe’s interest is part of a larger effort put forth by SFSC faculty. The brain child of Dr. Charlotte Pressler, professor of English and philosophy and director of SFSC’s Honors Program, “A Sense of Home: From Cultural Conflict to Coexistence in Florida’s Heartland” came into existence after she pursued a coveted National Endowment for the Humanities (NEH) grant. It is a three-year project focused on developing and enhancing local scholarship in Central Florida’s long history of cultural conflict and fusion. The $99,619 grant was awarded to SFSC in March 2016.

“The intention was to bring scholars on campus in a mini internal graduate seminar series for faculty and local high school teachers,” Dr. Pressler said. “Through this grant, we brought scholars to us, people who are recognized experts in their fields. After each of the seminars, we discussed the presentation material among ourselves and are incorporating modules into our current curriculum. These modules give students a taste of what their courses will be like at the university—analyzing, making connections, solving problems, applying concepts to new situations.”

Some of those scholars were Dr. Jerald T. Milanich, professor emeritus of the University Florida, who made presentations on the European invasion of Florida in the 16th century and Florida’s Spanish-Indian missions in the 16th through 18th centuries; Dr. Anna Lillios of the University of Central Florida who presented “Zora Neale Hurston and Eatonville”; and Dr. Mike Butler, professor of history at Flagler College, who presented “Confederate Imagery and Police Brutality: Racial Unrest and the Long Civil Rights Movement in One Florida Community.”

Pressler indicated that the grant focuses on Florida’s Heartland. “We live here; this is our home. Knowing that helps us understand how we got to where we are now and can give us inspiration for the future,” she said. “It can guide us and make us better citizens of Florida. We know that our students are coming to SFSC for job skills, we know that employers look to us for trained workers. Those economic and individual motivations are important in this world today. But there is a role for citizenship and community awareness as well. This is something the humanities can provide so that students going forward are better able to think about the meaning of what they’re doing.” 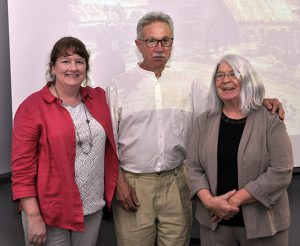 According to Dr. Pressler, Dr. Milanich is considered the world’s greatest expert on Florida’s indigenous people in the pre-contact and contact periods with Europeans. “Not many people realize that the Spanish had established a system of missions in Florida as they had in California,” she said. “Other new knowledge about that time period was the role that the epidemics—such as small pox and influenza—played in destroying Native American cultures. When cattle, hogs, and chickens were brought to North America by the Europeans, some of them escaped along with the influenza virus. Then, there was human-to-human transmission. In fact, the viruses crossed North America before the Europeans did.

“At SFSC, we have many students in the health care fields who are now grappling with the second wave of pandemics. Studying the earlier wave is critical to learning about new pandemics, such as Zika and AIDS.”

In her presentation to the SFSC faculty as part of the NEH grant, Leslie Kemp Poole, a professor from Rollins College in Winter Park, Fla. and a former journalist, focused on the role that women and women’s clubs played in forwarding early conservation and environmental movements in Florida.

“I was able to translate Dr. Poole’s work into teaching English I students,” Dr. Pressler said. “Dr. Poole brought a reading list. I now can offer her book and other sources to my students. The grant provided money to buy books for the library so students can check them out. The grant also provided money to create library guides, or libguides, so they can do research. With these resources, I guide students while they work on their research papers.”

“It’s easy for survey courses to become too general,” said Dr. Theresa James, professor of English and humanities, who assisted in organizing the NEH lectures. “The textbook that we’re using in Introduction to Humanities is quite good but it’s a textbook that could easily be used in California or France or anywhere. Each of the NEH scholars brought some of their material home to our district. So, there’s no reason why we can’t offer that level of relevance to our students.”

In some of her classes, Dr. James has encouraged students to read the translated letters of a Jesuit missionary, Father Juan Rogel, who came to Florida in the 16th century to convert the native populations to Catholicism. “I made copies of those letters for the students to read. As an instructor, I may have to provide the students with a level of context such as ‘Read the magazine from the Florida Humanities Council. These particular issues of the magazine give you all the background you need to understand the context of the priest’s letters.’ So, a student who read that background and then looked at the priest’s letters, might be able to answer questions for extra credit. This takes a step out of the survey textbook and a look into specifics. Students can better see Father Rogel as that guy on the ground during the Age of Discovery.”

Michelle Macbeth is a professor of foreign languages and humanities. As a member of faculty, she has incorporated material from the scholarly NEH lectures into her own humanities class.

“The final NEH seminar covered the civil rights movement and the continuation of the movement,” Macbeth said. “In my Introduction to Humanities class, I sometimes have the students do conversation pieces, where we just talk about issues in class. Obviously, the stipulation is that ‘we’re going to be objective, we’re going to respect each other, and we’re going to be kind in the things we choose to say.’ We’ll have a conversation at the end of class about how things—such as the civil rights movement—affect our modern existence. If students don’t tie the material to their everyday lives or something that has a connection to their everyday lives, they don’t always see the buy-in for themselves. So through our humanities class, they can say ‘This is how we got here, this is why this is important now, this is why we’re talking about this, and this is why this is a part of our society.’”

In addition to her role as curator of MOFAC, Stepe teaches Art Appreciation. As a result of the NEH grant presentations, she saw the potential of introducing local history and culture into her class this fall.

“I have to admit that a lot of my education and training was focused on Europe,” she said. “In my class, we cover the Paleolithic period up until the present. We cover a lot of material, but it’s not in-depth material. We talk about ancient cultures either in other countries or other states, so incorporating aspects of NEH seminar material brings it to a more local level.”

“When Dr. Milanich discussed the early Spanish missions in Florida and ritual items that were used, such as rosaries, I connected that discussion with the beads in the Goudnow exhibit. I was looking at the Goudnow beads in terms of ritual but also in terms of trade goods and currency because the Native Americans working for the missions may have been paid in beads occasionally. They would either make things of beauty with them or something of a symbolic nature or trade them or give them as gifts.”

Stepe mentioned a man who visited MOFAC last year and showed a particular interest in the Goudnow beads. “He said that 25 years ago, he and a friend were tilling a field in the area. The sun was setting and hit the field in just the right spot. The whole field glittered with all of these beads—thousands of them.”

Stepe indicated that a special project for students associated with the NEH grant might be to bring in an archaeologist and have them do a talk about excavating various objects, such as beads and spearheads. 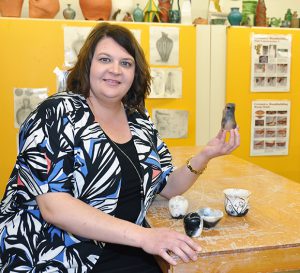 Karla Respress, art professor, plans to work with students in her pottery class on firing pottery in the ground instead of in a kiln. This method is sometimes called a pit fire. Instead of using the electric pottery kiln in the classroom, Repress and her class will take the pieces of pottery and slowly burn them on the surface or just below the surface of the ground with wood to harden the clay. “I felt it was do-able—we have the resources and the materials and prior knowledge of this technique. And this method of pottery firing is a natural fit with the NEH grant material.

“If we’re following the way the Native Floridians did it, you take broken pieces of pottery or rocks or even bricks and lift the places on the ground and put the pottery upside down on top of those just to create a kind of barrier between the pottery and the earth. Then you build a ring of pine cones or pine straw or grass or small sticks—fire starters—away from the pottery and then light it on fire. What that does is allow the pots to slowly get hot.

“You allow the fire to create the color of the pot. You can’t control the temperature like you do in a kiln. Clay will change color depending on how hot it gets, so one side of the pot will be a different color than the other side of the pot. You’ve got to allow it to do what the fire does to form the decoration of the piece, so we’re not sure what colors the pottery will be after the pit firing.”

The results of the NEH seminars may affect more than SFSC faculty and students. The faculty’s continuing exploration into Florida’s history and culture can extend into SFSC’s communities. When patrons visiting MOFAC learn that an artifact on display is from this region of Florida, they are often amazed. “People ask ‘This was found here?’” Stepe said. “I tell them ‘Yes, within a 30-mile radius of Avon Park.’”

“It’s my main goal for students to be excited, not only about learning about other kinds of art, but to be excited about where you’re at,” Stepe said. “Because there’s a treasure trove of things in this part of Florida, historically and archaeologically speaking, right here in our own backyard. I want members of our community to know about them.”