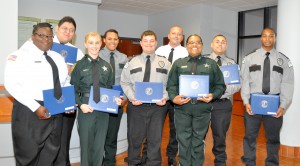 Thigpen received a special award for serving as class leader. Ridley received the award for top firearms score – a notable accomplishment, Austin pointed out, considering that he had never handled a weapon before entering SFSC’s basic corrections training course. White received the award for the top academic score, earning 454 points out of a potential 482.

In the keynote address, Wauchula police officer Jesse Poole recalled that, even as a child, his heart was set on a career in law enforcement, and he always pursued that path. Having a purpose and goals inspired him and kept him on track. “You only get one life to live,” Poole told the new graduates. “Locate the path you were meant to walk, and you will find goals along the way.”

By the time of graduation, seven of the new correctional officers were already employed in correctional positions.