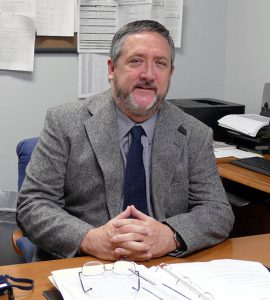 Most recently, Dr. McLaughlin was an associate professor in Criminal Justice at Fairmont State University in W.V., while serving as chief of police in Rivesville, W.V. In 2013, he retired as lieutenant from the Miami-Dade County Police Department after serving the community for 26 years.

Although Dr. McLaughlin was born in Boston, Mass., he and his family lived in various parts of the United States during his early years. “My father was in the Air Force,” he said. “When I was one month old, we moved to Bartow, Fla. We lived in Bartow for about a year while my father was training, then we went to Texas for a year, then to Kansas for a year, then to New Hampshire for five years, and then to Maine for three years.”

When he left the Air Force, Dr. McLaughlin’s father took a job in Miami with National Airlines and, eventually, United Airlines. “I really grew up in Miami,” he said. “When people ask me where I grew up, I consider Miami my home, because that’s where I went to middle school and high school.”

Throughout Dr. McLaughlin’s career, law enforcement and education went hand in hand. “Coming from a military family, I knew I was either going into the military or policing,” he said. “I was ready to go into the military right out of high school, but my father said, ‘No, you need to go to college first, then you can do whatever you want.”

After earning his bachelor’s degree, he was offered a job with the Miami-Dade County Police Department. The Department provided financial incentive for officers who earned bachelor’s and advanced degrees, along with tuition reimbursement. At the suggestion of a coworker, Dr. McLaughlin began taking master’s level courses. “I didn’t plan to get my master’s degree, but I took a few classes that would help me to get promoted. So I took a few and just got into the habit of going to college. The next thing I knew, I graduated with my master’s degree. I started taking some classes in the doctoral program and then I kept going and was awarded my doctorate in 2009.”

During the years Dr. McLaughlin was working in West Virginia, he wanted to carry forward the educational opportunities he was given in Miami. “They don’t have tuition reimbursement for police officers who want to continue their education, so I started a police scholarship up there for the police officers who were working. When I asked some of the officers why they didn’t take college courses, they said it was all about the money, so I started the scholarship for them.”

Another of Dr. McLaughlin’s career accomplishments came when he was awarded a commendation in 2016, three years after his retirement from the Miami-Dade County Police Department. “When I retired from the Miami-Dade Police Department, I was a lieutenant in charge of the economic crime bureau. About two years before I retired, I started an investigation with two officers. I had read an article in the newspaper about a homestead exemption fraud that was going on. The City of Hollywood, Fla. had done an investigation and had been able to recover $2 million.”

So McLaughlin suggested the Miami-Dade County Police Department investigate home exemption fraud as well. “I said, ‘If they got $2 million, we can probably double that.’ So that investigation started with two officers and myself and by the time I retired, we had recovered $40 million. It continued even after I retired, and it went from two officers to an entire squad of officers, which was about six officers and a sergeant, and that continues to this day. I received the commendation after being retired. By that time, the department had gotten up to $100 million. So that was probably the biggest thing that I did in policing.”

McLaughlin, of course, is a strong advocate for those who are interested in pursuing law enforcement as a career. “As you know, and everybody in the country knows, these are difficult times for police officers,” he said. “But we need good officers, and I believe that the best officers are the best educated ones. We should encourage officers to go into the field—it’s an honorable profession. I think we need them more than ever now, but we need good ones. We need people who go into the career to help the community.”

Dr. McLaughlin is married to his wife Marielena. They have a daughter named Katrina.