AVON PARK, Fla.–May 25, 2016–Dr. James Hawker, a biology professor at South Florida State College, may spend less time in the classroom for the next few years.

Since 2011, Hawker has carried a full load of courses, teaching SFSC students the fundamentals of microbiology and anatomy and physiology, or “A&P” in the lingo of undergraduates. 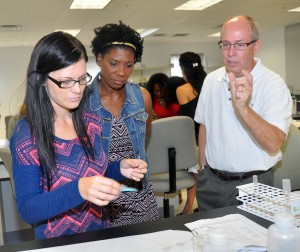 Why the change? On July 1, Erik Christensen will step down as chair of the college’s Natural Sciences Department, making way for Dr. Hawker to replace him. Christensen will take over as dean for SFSC’s applied science and technologies programs after the departure of Kevin Brown, who held that post for 18 years.

Now, as SFSC prepares for the start of a new academic year in August, Dr. Hawker will likely lighten his teaching load to free up time to manage the department.

“I am told it’s a challenge becoming department chair,” he said from his office in SFSC’s Norman L. Stephens Jr. Health and Science Education Center. “I’ll run the day-to-day operations of the department, which is very much unlike classroom teaching.”

But Dr. Hawker sees his role as much more than administrator.

“I look forward to using the office as a venue to promote undergraduate research in the classroom,” he said.

Increasingly, colleges with two-year programs are working scholarly research—once the domain of large universities— into the curriculum. “Research is also learning,” said George Boggs, president of American Association of Community Colleges. “It may be one of the most effective ways to engage students in learning a discipline.”

When Dr. Hawker came to SFSC, he brought with him a wealth of experience not just in teaching, but research at major academic health sciences centers. The experience gleaned from years of growing cells in a laboratory will benefit SFSC students as part of a drive to enhance classroom learning.

Dr. Hawker, a native of Biloxi, Miss., attended high school in Texas, where his father, an Air Force officer, was stationed. In 1977, he enrolled in the University of Texas at Austin. Dr. Hawker says he “bleeds Longhorn,” betraying his love for the Lone Star State and its powerhouse football team.

“When I got to college, I really took to biology and chemistry,” he said. “Many of my peers had medical school on their minds, but even though I tested as having an affinity for going in that direction, I went toward research.”

After earning his undergraduate degree, Dr. Hawker’s interest in biological research led him to the University of Houston, where earned his master’s degree while doing research in astrobiology, the study of life in space and earth.

“I found it a fascinating subject, but I learned there were scant career prospects in that field because NASA had cut back on funding research in astrobiology,” he said.

In 1989, eager to continue biological research, Dr. Hawker, with his wife and young daughter, moved 100 miles from Houston’s enormous metropolitan region to the relatively small town of College Station to work toward a doctoral degree at Texas A&M University.

“After my stint researching astrobiology, I found an interest in human health, particularly cell biology,” he said of his arrival at Texas A&M’s health sciences center. “I did my dissertation on angiogenesis, or growing new blood vessels in plain speak.”

While doing research at Texas A&M, Dr. Hawker also had an opportunity to get behind the lectern, teaching cell biology to medical students.

Late in 2002, he decided to move with his 13-year-old daughter to Tampa to take up a research position at the Moffitt Cancer Center.

“With the death of my wife from cancer, doing research at an academic cancer center meant something to me,” he said. “I had to move on and do something different.”

Most research positions come about through grant funding, and Dr. Hawkers’ Moffitt job came to an end in 2005. So, looking for work, he accepted a full-time teaching position at nearby Hillsborough Community College.

“Several friends in the profession told me I had knack for teaching,” he said. He put aside the lab coat and took on a regular teaching load, introducing students to microbiology and A&P.

Like many academic scientists, Dr. Hawker had been immersed in research, with classroom teaching often grafted on to one’s laboratory work. “I found at Hillsborough that what some friends saw as a knack became for me a passion,” he said.

While in Tampa, he met his second wife, who moved to Tallahassee to start a new job. Dr. Hawker followed and taught introductory biology to students at Florida State University and Tallahassee Community College.

“I was working as an adjunct instructor but I really wanted full-time employment,” he said of this time in Tallahassee. “After a statewide job search, SFSC offered me a position and I took it.”

Dr. Hawker taught his first class at SFSC in fall 2011. He already had six years of teaching students in associate degree programs the basics of biology. He noted the move to the region unfolded smoothly, with Hawker and his wife, Pat, readily appreciating the draw the community has for many newcomers.

He and his wife, who is an adjunct psychology instructor at SFSC, bought a home in Frostproof with a large yard, one that would accommodate Charlie, their Great Pyrenees.

“My wife and I went to an animal shelter and saw this beautiful dog in a cage with a sign that read ‘Help me! I don’t know why I’m here’,” Dr. Hawker said with a trace of endearment. “I told my wife we had to take him home, and we did.”

A guard dog by breeding, Dr. Hawker said the 125-pound Charlie barks at the hint of any intrusion—human or not—into his family’s space. “But, as it happens, he’s the gentlest of creatures,” he said.

Dr. Hawker also found a passion for running when he moved to the area. “I’ve become an avid runner,” he said. “I guess I just got sucked into it unknowingly.” He came in first place among his age group at this year’s Panther 5K run.

As he delighted in his knack for making cell biology and the skeletal system accessible to undergraduates at the SFSC Highlands Campus, his love of research started tugging at him. In 2014, Dr. Hawker teamed up with Christensen, his predecessor as chair and a professor of physics, to offer a research-oriented astrobiology course to students in the college’s Honors Program.

“Students were assigned projects that required them to conduct scholarly, scientific research dealing with life in space,” Dr. Hawker said, recalling his first foray into research as a student in Houston. The students’ research covered the effects of space travel on humans, the contribution of comets to life on earth, and terraforming the planet Mars.

“An amazing moment came at the end of the semester when the students stood at their desks and applauded Christensen and me,” he said. “That was a tremendously heartening experience.”

Now that he has taken the reins of the Natural Sciences Department, he is looking for opportunities to expand undergraduate research, and not just in science.

“I believe undergraduate research in any subject or field is a way to increase student involvement with their subject, learn it at a deeper level, and promote their analysis and critical thinking skills,” he said.

Dr. Hawker said these are all attributes that can benefit any student, whether transferring to a four-year institution or completing a terminal degree at SFSC.

Nancy Hensel, who heads up the Council on Undergraduate Research, observed that industry looks to associate degree-granting colleges to develop an “educated and technologically up-to-date workforce.” She sees undergraduate research playing an important role in meeting industry demands.

A sentiment echoed by Dr. Hawker as he prepares to assume his new role at SFSC.

“Employers value students who can analyze and problem solve,” he said. “Undergraduate research promotes just that.”